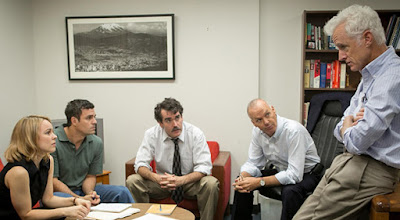 In 2002 a small investigative unit on the Boston Globe published a series of articles in which they proved that the Catholic Church has systematically covered up hundreds of cases of child sex abuse by dozens of priests over decades. The story helped create an outpouring of testimony that exposed just how global the scandal truly was - with abuse and cover-ups in many American parishes, but also in most every other country. For that reason alone, this film is an important one.

But in focussing on the Spotlight team, and the scandal in Boston, the movie is saying about the kinds of community where all the institutions act as a closed shop of mutual self-interest and authority cannot be questioned.  To that end, I could see strong parallels to how the scandal played out in Boston and Ireland. Because what was worse than the abuse, was the way in which the Church used all the levers of power - police, law, press - to suppress the story and silence the victims.  In doing so, the initial crime was massively accelerated as priests were left in the community to continue offending.

So it should be no surprise that this movie opens with a new editor coming to the Globe.  Liev Schreiber's Marty Baron is an outsider - non-Boston, non-Catholic - he immediately puts the team onto the Geoghan abuse case because why aren't they already on it?  It's hard to read any kind of motivation in Baron. The man is calm and inscrutable but he wants to take down the system.  He leaves the righteous anger to Mark Ruffalo's reporter Mike Rezendes and the sympathetic looks to Rachel McAdams' Sacha Pfeiffer and the parental concern to Brian D'Arcy James' Matt Carroll. Meanwhile Marty Baron just sits there like a cold fish being right.  While we watch the younger reporters dig into the story and right it up there's a more sinister story playing out.  How far did the city's lawyers help the Church cover up the abuse and how far did the Boston Globe itself bury the story. We're given two senior editors to pick from - John Slattery and Michael Keaton - but if this is where screenwriter Josh Singer is trying to inject some Deep Throat style tension it really doesn't work.  But it does serve to make the larger point that everyone was complicit.

SPOTLIGHT is a gruelling film.  I knew everything that happened in the film before I went in - like most Catholics we go over and over how we feel about the Church we find corrupt - but it was still a movie that shocked me and made me fill physically sick.  The big name actors may be up for awards but it was the quiet desperation of Neal Huff as abuse survivor Phil Saviano that really got to me.  This poor guy has had his innocence taken from him - his religious belief trashed - and even though he has the courage to come forth and even support other victims he has to face decades of being deliberately ignored by the police and the lawyers and the press. It's just galling.

But this is not a film on a par with ALL THE PRESIDENT'S MEN - with which it has been so often compared.  Writer-director Tom McCarthy beautifully recreates the shabby, hard-working newsroom but he doesn't have the visual mastery of Alan Pakula.  Nor can Howard Shore's workmanlike score compare to David Shire's sinister and oppressive score for that earlier iconic film.   No matter. This is still an important and compelling movie. Indeed, it works brilliantly well with the stylistically quite different Whitey Bulger biopic BLACK MASS. Both depict a Boston in which vested interests collude and corruption is widespread. Both teach an important lesson about the importance of outsider's and the separation of powers.

SPOTLIGHT has a running time of 128 minutes and is rated R. The movie played Venice, Telluride and Toronto 2014 and opened last year in the USA and Canada. It opened earlier this month in Brazil, Thailand, Mexico, Israel and Singapore. It opened this weekend in France, Australia, the Netherlands, Portugal, Spain, Finland, the UK and Ireland. It opens on February 5th in Poland and Sweden; on February 11th in Argentina, Chile, Hong Kong, Russia and Sweden; on February 18th in Indonesia, Croatia, Hungary, Italy, Bulgaria, Estonia, Lithuania and Venezuela; on February 25th in Germany, Denmark and Greece; on March 11th in Norway; on April 8th in Cambodia and on April 15th in Japan.
Posted by Bina007 at 22:04