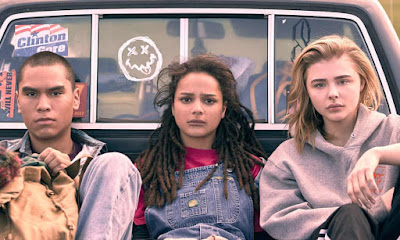 THE MISEDUCATION OF CAMERON POST is a beautifully directed, occasionally sinister but ultimately uplifting coming of age drama about a teenage girl sent to gay conversion therapy in 1990s America.  Given the current repressive climate in the USA, and the UK government's plans to outlaw such therapy, the movie has never been more timely, and for people like me who might have vaguely known such a thing existed, it's profoundly insightful.

Cameron Post is a no-nonsense, smart, witty young girl played with real nuance by Chloe Grace Moretz. She has been raised by a Christian fundamentalist aunt, and when found having sex with another girl at the high school prom, she's summarily dispatched to a religious camp in the middle of nowhere. What I love about Desiree Akhavan's depiction of Cameron's relationship is that it does not - as so many mainstream films do - shy away from depicting actual female sexual pleasure.  But it also never feels prurient or exploitative.  You get the strong sense that Cameron is really in love with Coley, and that it has broken her heart to be sent away from her. Her desperate loneliness is what makes this a really tragic film.

The school slash prison camp is bland, quietly sinister, and that disturbing mix of apparently earnest but basically evil. This is embodied in the character played by Jennifer Ehle - a psychotherapist who has "cured" her clearly deeply disturbed brother of his "same sex attraction".  Is there anything more frightening than an apparently well-meaning ideologue who knows better than you what you really think and feel?  Pure nastiness. She may be beyond redemption, but seeing her brother struggle with his own guilt of what the therapy is doing to the young kids subject to it is harrowing. Perhaps even worse is seeing our strong, smart heroine start to doubt her resolve - wondering if maybe she is resisting help and should just go with the programme.

The amazing this is that despite this truly heavy material, and one truly brutal scene, there are flashes of wonderful humour and camaraderie in this film, and Akhavan has a beautiful way of capturing the intimacy of teens sharing their frustrations and dreams.  To that end, I was really impressed by Forrest Goodluck, playing Cameron's friend Adam. But ultimately this is Chloe Grace Moretz' film and it was wonderful to see her display real range here - from sadness to anger to benumbed pain to joyous raucousness. I hope she continues to seek out challenging material like this.

THE MISEDUCATION OF CAMERON POST has a running time of 91 minutes. The movie played Sundance 2018 where it won the Grand Jury Prize - Dramatic, and was released in the UK in September.  It is now available to rent and own in the USA and will be available in the UK in January 2019.
Posted by Bina007 at 18:13