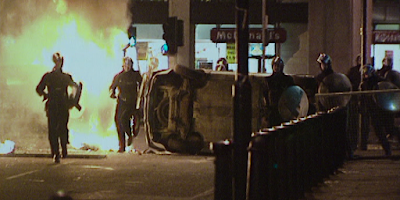 In 1999, a pathetic hate-filled white 22 year old Nazi terrorist decided to start a race war boy planting home-made nail bombs in two parts of London with large ethnic minority populations, and then in one of the city's most iconic gay bars. He claimed, once caught, that one of his motivations was fame, so I shan't be naming him here.

Daniel Vernon's new documentary is the well-constructed concise story of the people who lived in those communities and were caught up in his hate-crimes, as well as the police and earnest members of the public who brought the man to justice.

We begin with the Brixton bombing, and a  moment of unexpected hilarity, as two market traders selling pirated cassettes and videos describe the events of the evening. Perhaps the most London part is their story of a passer by who had the stones and basic thievery to literally steal the bag the nail bomb was sitting in. I mean, come on! Knowing a bomb is in a bag, and literally taking it out and running off with the bag is just hilarious.

But this is a rare moment of levity as we move into the meat of the film. Amazingly, no-one died in Brixton but the injuries were horrific - not least a baby with a four inch nail embedded in its skull.  It was a similar tale in Brick Lane, another busy ethnic shopping street on a weekend evening. The police swing into action, combing through CCTV footage on antiquated video tapes to identify a white man in a mask. Posters are printed and a man called "Arthur" realises it's a man he knows. This is when Arthur emerges as a real hero - an undercover informant who had infiltrated the far right British National Party and led the police to the terrorist.  Not soon enough - quite - to prevent the horrific bombing of the Admiral Duncan pub - vividly described by one of its victims.

We then see the second moment of unexpected levity in the film, when a "big hairy man from Essex" decides to write to the incarcerated terrorist, pretending to be a naive young Nazi sympathising girl called Patsy. The aim of the deception is to con the terrorist into boasting that he's not actually insane (as he's claiming in his defense) but just a nasty Nazi. This he does, and so he is imprisoned for the rest of his life. Kudos to Essex man!

NAIL BOMBER: MANHUNT has a running time of 72 minutes. It is streaming on Netflix.