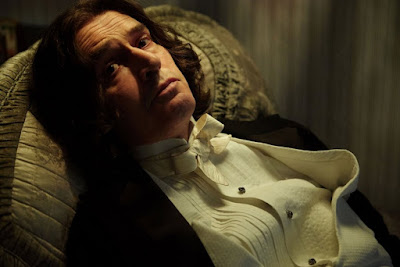 Oscar Wilde is one of our great playwrights, poets and wits, but his work has rightly been overshadowed by the significance of his life.  He has become a symbol of the hypocrisy of Victorian England - apparently happily married and a father, Wilde embarked on a series of homosexual affairs that were tolerated by polite society while they were with people lower down the social ladder and discreet.  But when Wilde dared to have a highly publicised affair with Lord Alfred "Bosie" Douglas, son of a boorish, violent, aristocrat, he ended up in prison.  This tragic fall, from feted and celebrated writer to spat upon criminal was harsh - from luxury to hard labour - from beloved father to exile.  When Wilde was released from prison he gave us two great works - The Ballad of Reading Gaol and De Profundis - but nothing of substance thereafter. He lived a rakish life on the Continent, cut off from his family, alienated his remaining friends with a temporary reconciliation with Bosie, and descended into poverty, ill health and death.

Understandably the many film adaptations of Wilde's life have refrained from putting this often sordid tale on screen. They conveniently end when he enters or leaves prison, or reconciles with Bosie. We therefore remember Wilde as young, in love, and hopeful.  THE HAPPY PRINCE refuses to let us off the hook that easily.  The handsome Rupert Everett allows himself to transformed with a fat-suit, false teeth and make-up into an old, weathered, ashamed, drunk and hopeless man.  There are occasional flashes of Wildean wit, but really this is the story of a man broken by love, hypocrisy and simple lack of funds. He cannot write - whether because of the trauma he has experienced, or the stress he still endures, or because of the distraction of Bosie.  He knows his life is ending but cannot stop hurtling himself toward self-destruction, spending freely, loving freely, until the end.  Even a romantic death bed is interrupted by violent vomit. We cannot escape all the contradictions - seemly and unseemly - of Wilde.

Everett's performance is magnificent and unflinching in a way that feels eons beyond the more manicured performances of previous films. And he is ably supported by a cast including Emily Watson and Colin Firth as Wilde's wife and good friend Reggie.  We are also fortunate in the casting of Wilde's warring lovers - Edwin Thomas as his devoted and loyal literary executor Robbie Ross, and TV's Merlin, Colin Morgan, as the beautiful but selfish and fickle Bosie. The performances demand to be seen.

My regret is that Everett did not succeed in finding a more seasoned director to helm this wonderfully acted, daringly non-linear script.  He makes another daring choice to have an almost verite style to his filming, with a handheld camera and lots of POV shots. It's effective in some places - and many costume dramas can feel stuffy and old-fashioned when they match a static camera with restrictive costumes. But I found the camera too distracting, drawing my attention away from the superb performances. There are also certain cuts and juxtapositions that felt too on the nose, or too forced which I felt a more seasoned director might have avoided.  So this is a flawed film, but a deeply earnest, compassionate and well-acted one nonetheless. 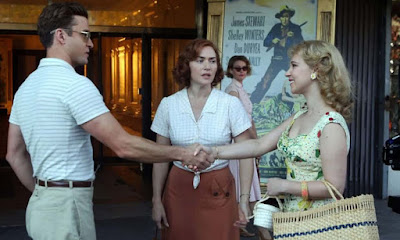 WONDER WHEEL is no BLUE JASMINE, but it's still far better than the mediocre rote films that we've come to expect from late era Woody Allen, elevated by a superb performance by Kate Winslet, in one of her now trademark performances as a disappointed weary middle-aged woman. She plays Ginny, wife of the man (Jim Belushi) who runs the Coney Island ferris or wonder wheel.  She has a mid-life crisis affair with a younger aspiring playwright and lifeguard called Mickey played by Justin Timberlake. This allows her to indulge her nostalgia for her aspirations to being an actress in her youth - but also self-consciously to act.  She rehearses telling him that she's older and married.  She claims that her real life as a waitress is performative. The meta-layers of performance - of being alienated from reality - are heart-breaking.

The heart-break is compounded because we know that the affair means far less to Mickey than to Ginny, as is evident when he starts seeing Ginny's stepdaughter Carolina - a fragile and vulnerable girl played by a superb and much under-rated Juno Temple. Its here that the movie suffers - with the Pygmalion attempt at education of Carolina by the pretentious Mickey and the usual Allen moral lassitude for men who go with their dicks lead them.  But the film recovers remarkably in its final act - reminiscent of CRIMES AND MISDEMEANORS - featuring a tour de force scene from a drunk and delusional Ginny as she is confronted by Mickey and then her husband.

This film is worth watching for Vittorio Storaro's candy coloured, sunlit orange photography and the period costumes alone. Woody Allen's crowded claustrophobic Coney Island and the wonder wheel become oppressive despite their beauty.  Altogether there's something almost Sirkian and expressionist about the way this film is shot that matches Ginny's conception of herself as being in a melodrama.

Marina and Orlando share a life together. They are in love. Then one day Orlando has a heart attack and dies, sustaining bruises as she tries to get him down the stairs and to the hospital. Marina is in a deep state of grief for her lover, but it's a grief that is not permissible or acceptable in contemporary Santiago, and maybe anywhere yet.  The doctor tells her to wait outside the treatment area, Orlando's family won't permit her to attend the funeral. The police think the relationship might've been commercial, or abusive. They demand and invasive examination to be sure. Marina and Orlandos' love is seen as perverse; something that can't be seen in front of the children; Marina as unreal. And finally, their love is something to be physically punished, Marina brutalised. And through all this we have Marina, quiet, enduring, emotional trauma etched on her face, forced into the margins of her dead lover's life. No wonder she escapes into a beautiful fantasy world where she exudes strength, beauty and confidence, where she can still see her lover.

That this film is as powerful as it is owes much to the quiet nobility of trans actress Daniela Vega's lead performance, and the superb direction of Sebastian Leila (GLORIA) that mingles clean sharp-coloured Santiago with a more wonderful neon-lit disco dream world. This contrasts with a script that is very matter of fact, linear, straight forward. It's a film that centres us on Marina and the thousand small cuts of cruelty she suffers - the power is cumulative and quite devastating.

A FANTASTIC WOMAN has a running time of 104 minutes and is rated R in the USA and 15 in the UK for strong language and discriminatory behaviour. The film played London 2017 and won the Oscar for Best Foreign Language Film.
Posted by Bina007 at 13:44 No comments: 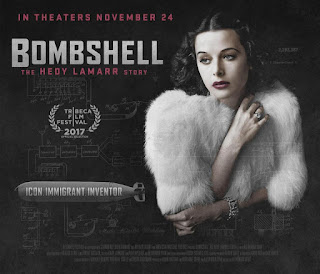