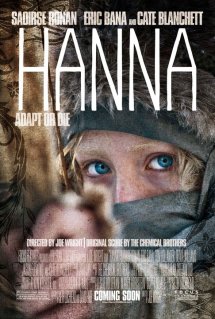 HANNA is a visually stylish; brilliantly edited; powerfully orchestrated action movie let down by inconsistent acting styles; insufficiently developed themes; and a story full of plot holes so large you could drive a horse and carriage through them.


Let's start with the bad. HANNA is a story that simply collapses on its own lack of logic. Papa (Eric Bana) wants to keep Hanna (Saiorse Ronan) safe from evil CIA meanie, Marissa (Cate Blanchett).  Lesser-trained peeps might think to hide in plain sight in a major metropolis, camouflaged by banality.  But no, ex-CIA tough guy, Papa, decides to keep Hanna in a wintery forest, training herto be a bad-ass assassin, Kick-Girl-stylee, and then, allowing her to press a transponder button that immediately alerts the CIA to her presence!  And even then, rather that travel to some safe little town Papa and Hanna engineer a confrontation in Berlin because, hey, without that, there wouldn't be a film.  The CIA are similarly idiotic. For those who have seen the film, I simply ask why Marissa didn't run after Erik and the baby after the car accident and end proceedings right there?


Still, let's say we go with this absurd plot and willingly suspend our disbelief, the movie doesn't help by consistently undermining the credibility and authenticity it's so desperately trying to create. (And I'm not just talking about idiot goofs like showing that Hanna's ears have been pierced).  The big problem is inconsistent acting styles.


Ronan does a good job in trying to convey what it must be like for an isolated child to suddenly be part of the modern world, with its incessant babbling.  Director Joe Wright, together with his DP Alwin Kuchler, and his editor, Paul Tothill, do a stand-up job of depicting sensory overload.  I also loved Hanna's tentative first friendship with a teenage camper, played by the scene-stealing Jessica Barden (TAMARA DREWE).  There is a real sense of intimacy and authenticity - in particular, I loved the scene in the tent - it was intimate but never felt voyeuristic or exploitative.  I also really loved Hanna's reaction to seeing a real family interact for the first time - her simple smile at seeing a mother and father hugging a child. I completely disagree with reviewers and commentators who say that the film loses pace at this point.  After all, this is not just an action film but a character-driven film - and Hanna's response to the family moves this film beyond KICK-ASS and into some altogether more interesting territory.


The problem is that all this good character-work is completely undermined by Cate Blanchett's hammy performance as the CIA agent, Marissa.  Blanchett's Marissa isn't so much a fully developed character as a colour-coded compendium of caricatured evil: posion-green Prada shoes, bright orange ill-fitting fright-wig and ever-shifting Southern accent (as if, in this post-Osama world, the worst thing you can sound like is a Southern Republican).  It was almost as much of an embarrassment as the throw-back costume design of Tom Hollander's sleazy German night-club owner and his skin-head Droogs - as if A Clockwork Orange had been crossed with Smiley's People.


I suspect the problem was that Joe Wright was trying to explore the fairytale themes in the story - Hanna as a little red riding hood in a cottage in the woods and Marissa as a kind of evil step-mother figure and/or the big bad wolf.  The cottage in Berlin is out of Hansel and Gretel...  These themes are suggested in the visuals - costumes, colour choices, and even more explicitly in the final scene between Marissa and Hanna. But, those themes are obstructions to credibility and are never fully developed.  I think that's why, when I finally left the cinema, I felt I had been given a taste of something deeper, something clever, but that the film hadn't followed through.


Still for all those criticisms, and the final sense of disappointment, I really did enjoy watching HANNA and I think it's definitely worth the price of admission for the brilliantly choreographed and scored action sequences and the friendship scenes between Ronan and Barden. Joe Wright needs to make a flick that either pure character-driven action - like BOURNE - or pure character. He needs to stay focussed and pick a script that hasn't been worked over so much that it becomes a mass of contradictions and poorly developed themes.

HANNA is on release in Aruba, Greece, Hong Kong, Canada, the US, Malaysia, South Korea, Taiwan, Iceland, Belarus, Kazakhstan, Russia and the UK. It opens on May 11th in Belgium, on May 13th in Italy and on May 26th in Germany and Switzerland. It opens on June 9th in France, Argentina, Estonia, Spain and Turkey. It opens on June 16th in Hungary, on June 23rd in Portugal, and on July 7th in Sweden, the Netherlands and Norway. It opens on July 21st in Singapore, on August 27th in Japan and on September 1st in Australia and New Zealand.
Posted by Bina007 at 15:36