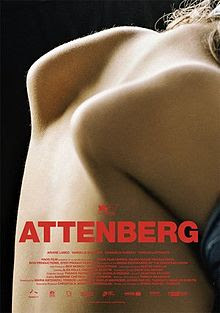 This review is brought to you my guest reviewer, Karan Aurora:

Athina Rachel Tsangari's Attenberg is a curious little film. For its brief running time it completely busies itself with chronicling a brief period in the life of Marina (Ariane Labed). She is a 23 year old girl who lives in an anonymous town in Greece nestled in a quiet valley with its own bay, a big industrial plant on its outskirts and a whole lot of white little matchbox houses joined neatly by perpendicular pavements and roads. One of the architects who worked building this little industrial town is Marina's father who is now dying of a terminal illness and his daughter remains his sole support. Marina, previously disinterested in guys and all things romantic is also seen starting to explore her sexuality and has started to date a guy from the town. When not shuttling her dad in and out of hospital or taking newbies around town, she is seen spending most of her leisure time either watching David Attenborough's wildlife documentaries (the film gets its title from her erroneous pronunciation of his surname) or indulging in synchronised randomness with her best friend: from time to time the film cuts to these two girls dressed in identical costumes walking step in step and doing choreographed runs down their favourite back alley.

There is much that perplexed me about Attenberg but probably the most was Tsangari's insufferable need to underline the quirks of the protagonist (quite like my paragraph above) to the point that it came across as patronizing and slightly voyeuristic. After the fourth time a mellow moment or a contemplative conversation is intercut with two minutes of Marina's silly walk with her friend any mood and atmosphere conjured with meticulous detail by Tsangari (whitewashed interiors, gloomy grey skies, rain spattered windows and generally a pallette sucked of all colour) completely evaporates. It might be just for effect or relief or a way for a deeply conflicted Marina channelling her rage, but being jolted time and again when you are busy trying to invest in the movie's characters and the context here gets rather irksome. There are countless such instances where you see Tsangari squealing Weird Small Town People from the way she emphasises odd things in her shots and reduces her people to tics and fixations. Very briefly though, she manages to get it all right, invests some care and makes it all flow. And it works. Like how from out-of-the-blue her main characters suddenly launch into an impromptu play-fight where they mimic gestures and calls of animals they so religiously watch in Attenborough's documentaries. But outside these choice moments, the film struggles to hang together.

I also did not particularly revel in having Marina as a protagonist. Besides being crowded with quirks and typical teenage curiosities that she feels the urge to vocalise all at once, she is given an emotional range of a toothpick. Nothing much has ever caught her fancy and frankly, she couldn't care less. On the surface, she might wonder about her "alternate" ideas about sex, relationships and how she is "above it" and "does not see the fuss about love, guys, intercourse" etc, but give her some alone time and her affectations and concerns are as twee as any teenage girl next door. Ironically even at her most subversive, like with her friend doing their dancing and singing and spitting as a twosome, she is stilted and as later revealed, incapable of empathy. Oscillating between being passive aggressive and ambivalent, there is little coherence to her actions or thoughts for the people around her and Tsangari's opaque film offers very little in terms of both explanation and warmth.

Without any emotional connect then, watching Attenberg purely at an intellectual level also proves underwhelming at best. If there was any anthropological insight into this "abandoned small town phenomenon" where people who are reared up without much stimulation and exposure from further ashore and who are not being bombarded with expected and accepted societal schemas and behaviours from the internet, TV, radio etc then grow up to be such emotionally sterile dispassionate zombies then it is (thankfully) cancelled out by the three thanklessly written functional supporting characters who surround Marina.

Some of the inorganic elements are beautifully filmed here, like the long takes of the alumina refinery in the end credits or the water movements of garden sprinklers in the start credits but the directness and clarity with which Tsangari starts with her people in this film is never really followed upon. You do take some moments home like a father regretfully looking down from a tall terrace on the ugly town he helped form or on being asked a suitable music for her father's funeral service the girl asking if bebop is an option, but overall you come out of the cinema slightly amused but totally unmoved and unconvinced.

ATTENBERG played Venice where actress Ariane Lebed won the Volpi Cup and writer-director Athina Rachel Tsangari wo the Lina Mangaicapre Award. It also played Toronto 2010 and Sundance 2011.  It opened in 2010 in Greece and earlier this year in Austria, the Netherlands, Sweden and Estonia. It is currently on release in the UK and Denmark. It opens on September 21st in France.
Posted by Bina007 at 19:40