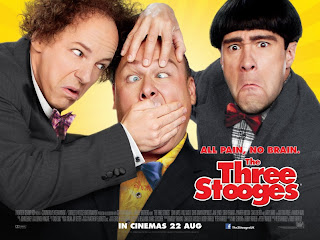 The turning point was the scene where Moe got cast in Jersey Shore and slapped The Situation silly.  Up until then the movie had mostly been a paint by numbers childish garish slapstick comedy.  Sure, I could see the technical skill in pulling off the pranks, but a trio of child-men dressing in drag and duelling with pissing babies is hardly my idea of a good time. And as for the plot, one can only assume that the Farrelly Brothers were being self-conscious in ripping off THE BLUES BROTHERS orphans-raise-money-to-save-the-kiddies idea.  I was embarrassed for everyone involved, and especially for Sofia Vergara, who plays the murderous slut who hires the Stooges to kill her rich husband.  Why would the star of America's highest rated prime-time network comedy be doing such a crude film?

But then it happened.  About half way through the film the brothers have a fight and Moe falls into a role on Jersey Shore.  Suddenly I was laughing out loud as the provincial dolt roundly taking the proverbial out of the fake-tanned, slow-witted reality starts. This was pure comedy gold.  And as soon as I opened myself up to it, I realised that I actually did appreciate just how good the three lead actors were - especially Chris Diamantopoulous as Moe.  Worst of all, I realised that I actually cared about what happened to guys.  I wanted to know if they'd make up with each other, and whether they'd save the orphanage, and whether the mean gold-digger would get her comeuppance.  And even at that point, the movie continued to surprise me with a couple of small plot twists at the end that undercut its day-glo saccharine feel.

Alls I can say is that despite my initial revulsion at crude slapstick comedy, I actually had a good time with THE THREE STOOGES, and in its final half hour, it becomes a much cleverer movie than one is led to believe by its initial men-in-drag-as-nuns type humour.  I'm not saying I'd watch it again - but I'm glad I watched it once!