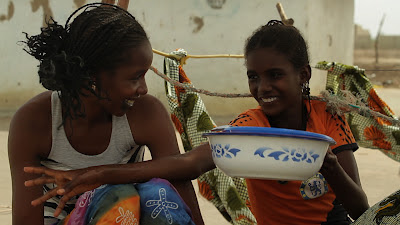 At first glance, our two first Top Picks for London 2012 seem worlds apart.  THE HUNT is set in the affluent liberal Nordics, whereas today's pick, TALL AS THE BAOBAB TREE, is set in rural Senegal.  But both employ a very distinct technique to bring the viewer right into the heart of the story - both create a sense of intimacy and of moral urgency - both focus on the agency and vulnerability of children within a community - and both are exquisitely shot.

TALL AS THE BAOBAB TREE is not a dogme film, but it is definitely a "found" art.  Debut feature director Jeremy Teicher has assembled his story and his cast from a documentary project in Senegal, and the resulting feature film has an authenticity and intimacy that is captivating.  He casts real-life sisters Dior and Oumoul Kâ as fictional sisters Coumba and Debo.  The first generation to be sent to school in their village, this small step to emancipation and education is threatened when their father must pay his son's medical bills, and so pulls the younger sister from school in order to arrange her marriage.  The elder sister tries to prevent this backward step by taking employment in the city.

What I love about this film is the complete lack of cultural arrogance or simple moralising.  The decision to take the girl out of school and arrange her marriage is not seen as a bigoted outrageous step, but as part of the rich tradition of the village.  We understand that the father is genuinely trying to do what is best for his family: it's just that the next generation has had a taste of a different life and will try anything to retain that opportunity.  Indeed the over-riding theme is one of the impossibility of communication.  When the elder sister tries to explain the situation to her teacher, he rather facilely tells her to explain to her father why he should alter his views - as if such a simple thing is possible!  Every decision in this film is fraught and enmeshed in the conflict between traditional familial duty and modernity.  And if it seems rather far away from contemporary London, I can only say that this is exactly the same  kind of conversation that I have experienced in contemporary British-Asian society.

But I should stop there. I don't want to give you the impression that TALL AS THE BAOBAB TREE is an earnest, preachy, but rather dry film.  Rather, it is absolutely captivating and emotionally involving. The cast transmit their intimacy and everyday triumphs and setbacks against a backdrop of stunning Senagalese landscapes.  There are as many moments of joy as of conflict, and the film is worth watching for DP Chris Collis' HD lensing alone.

TALL AS THE BAOBAB TREE aka GRAND COMME LE BAOBAB played London 2012.  It does not yet have a commercial release date.