THE MAN WITH THE IRON FISTS 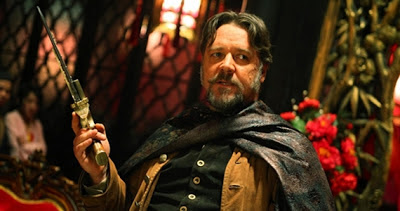 THE MAN WITH THE IRON FISTS is not a movie you're going to enjoy on date night, sober. It's the kind of  movie that requires a few beers and a college dorm room so that it's inconsistency and sheer ridiculousness becomes a virtue.  It'll also help if you, the viewer, has a much of a geeky knowledge and love of The Shaw Brothers martial arts flick, and also with to pay homage to Gordon Liu.  This movie may be "presented by" Quentin Tarantino, but don't be fooled. RZA's directorial début is not like KILL BILL - tightly written, slickly produced, allowing all viewers a point of access. This is definitely a B-movie - not grungy enough to be pure blaxploitation wushu, not well-made enough to be taken seriously.  The plot is stupid, character development non-existent and the leading man (RZA himself) has about as much charisma as former British Prime Minister Gordon Brown.   But when the movie works, in one or two key scenes, it really will make you laugh out loud, and the martial arts sequences are all excellent - as they should be, considering they star many of the genres most famous fighters.

The movie is set in "Jungle Village" - a dirt poor town in 19th century China, that happens to have a kick-ass freed slave blacksmith (RZA) and a super luxurious whorehouse, presided over by Madam Blossom (Lucy Liu). It also houses the Blacksmith's hooker/sweetheart (Jamie Chung).  The blacksmith is forced to make kick-ass weapons for various rival gangmembers, not least Silver Lion (Byron Mann) and the late Golden Lion's real son The X-Blade (Rick Yune). Into this potent mix comes the Governor's gold shipment, which the Lion gang attempt to steal from the Geminis, and who knows where Mr Knife's allegiances lie?

The real fun of this film lies in a gloriously overweight Russell Crowe playing Oliver Reed playing Mr Knife. Pure Comedy Gold, especially in his interaction with Lucy Liu's proto-feminist brothel-keeper.  Crowe and Liu are joined by the wonderfully camp Bryon Mann in taking this movie about as seriously as it requires i.e. not very much, and all three are having a ball. It's a shame the other characters didn't join suit.  Sadly, whenever they're not on screen, you just get heavy exposition and boredom while waiting for the next fight scene. But these are worth waiting for. MMA star Dave Bautista is used to great effect, and I'm guessing we'll all remember what Gemini stance is from now on.

Overall, THE MAN WITH THE IRON FISTS is far from a classy flick, but it drips with love of the genre and if you're in the mood to go with it, with a beer in hand, it's more than a fun time. And please will someone give Crowe more roles like this?

THE MAN WITH THE IRON FISTS was released in November in the USA, Canada, Kuwait, Spain and Germany. It opens on December 7th in the UK, Ireland and Australia. It opens on January 2nd in France and Belgium; in January 11th in  Bulgaria; on February 8th in Sweden and the Netherlands; and on February 21st in Argentina and New Zealand.
Posted by Bina007 at 10:48