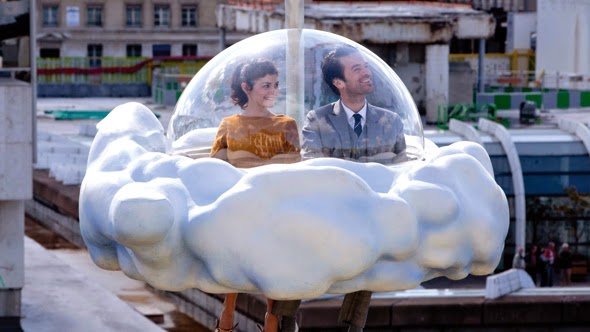 The movies of Michel Gondry have a kind of whimsical joy in making and doing - a kind of home-made gonzo cut out and paste feel that belies their deeply felt emotions and philosophical musings.  And MOOD INDIGO, his latest movie, is very much in that tradition of surreal, tragicomic, visually inventive joyousness - a movie that could only ever unmistakably have come from his imagination - that echoes all that is glorious in THE SCIENCE OF SLEEP.

Based on the French cult novel by Boris Vivan, the movie begins as a magical surreal love story with the earnest, generous and lovely Colin (Romain Duris - MOLIERE) wooing and winning the equally adorable Chloe (Audrey Tautou - COCO BEFORE CHANEL). At the same time, the apparently independently wealthy Colin lives a life of crazy cocktails, dance crazes and eccentric friends. He has apparently hired a high-powered lawyer (Omar Sy) as his chef and he's bankrolling his best friend Chick (Gad Elmaleh) as he wooes his sweetheart Alise (Aïssa Maïga - BAMAKO). But as the movie progresses, the colour literally drains from this fairytale world of wind-up toys and stop-motion bubble-car chases.  Poor Chloe inhales a waterlilly seed that grows on her lungs and threatens her life. We start to see the sci-fi dystopian reality at the edges of this picture-postcard world. Some kind of strange war or maybe an environmental disaster overlaid with a wasting of money and dark addiction.

The resulting film is hard to categorise, and I would imagine, hard to sell. Is it a light romantic comedy complete with its own trademark dance craze? Or is it a deeply depressing dirge? Can it be both whimsical music-box and profound comment on inner corruption?  Yes - triumphantly yes!  It's like Gilliam and Disney and Jean-Pierre Jeunet mixed together in a delightful, provocative confection - a film that is genuinely unique - and my film of the year to date.

MOOD INDIGO was released earlier this year in Belgium and France. It opens this weekend in Hungary and the Netherlands. It opens on June 27th in Russia, on June 28th in Brazil, on July 5th in Poland, on July 18th in the Ukraine, on August 1st in Hong Kong, on August 2nd in Lithuania, on September 6th in Taiwan, on September 12th in Australia and Italy, on September 27th in Spain, on October 3rd in Germany, on October 5th in Japan, on October 24th in Greece, on October 25th in Finland, on November 7th in Denmark, on December 19th in Singapore, on December 20th in Sweden, on January 2nd 2015 in Portugal, on January 17th in Mexico, and on July 18th in the USA.
Posted by Bina007 at 14:09