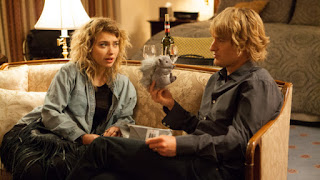 The celebrated Hollywood director and raconteur Peter Bogdanovich returns to our screens after a 17 year hiatus with a romantic comedy that one can only generously describe as "inspired by" Woody Allen romantic comedies. It's set in New York. The opening credits feature an easy listening track from the 1950s.  The lead character is a young prostitute with a heart of gold and a over-egged Noo Yoick accent in the manner of Mira Sorvino.  She's forms a relationship with a much older successful married man.  People have irritable but witty conversations on side-walks and disparage the irritatingly perfect weather in Los Angeles. Psychoanalysis features. There's even a wise-ass voice-over and a knowing love of Hollywood convention.

Does this blatant channelling of Woody Allen make SHE'S FUNNY THAT WAY a bad film?  No. It's not a bad film. It's a fairly dull film - contrived in its chamber comedy set-up - often mis-firing in its humour.  It goes a little something like this.

We meet a young Hollywood starlet called Isabella (Imogen Poots) in a framing device being interviewed by a cynical reporter called Judy (Ileanna Douglas) who doesn't buy Isabella's wide-eyed romanticism about Hollywood, and indeed, life.  Isabella then proceeds to unabashedly but delusionally narrate her life story - a girl who spreads happiness aka a hooker, she's paid by a soft-hearted married director called Arnold (Owen Wilson) to give up hooking. So the next day Isabella goes to her therapist, Jane, a hilariously judgmental indiscrete Jennifer Aniston, and then to an audition for a play about a hooker that just happens to be directed by Arnold and stars his wife Delta (Kathryn Hahn).  The plays also stars Debbie's ex (Rhys Ifans) who's still chasing her and knows Arnold slept with a hooker. Meanwhile, the playwright Joshua really likes Isabella, and used to date Jane.

I think whether or not you go for this kind of film depends on whether you can bear the contrived set up.  Without a steady stream punch lines and laugh out loud moments the set up grated on me. Its only saving grace is a cameo from Lucy Punch as a hooker called Kandi.  It is the tragedy of Punch's career that she is routinely the best thing in any movie she stars in.

SHE'S FUNNY THAT WAY is rated R and has a running time of 93 minutes. The movie played Venice 2014 and was released earlier this year in France, the Czech Republic, Slovakia, Ukraine, Romania, Estonia, Vietnam, Israel, Serbia, Slovenia, Italy, Lithuania, Hungary, Poland and Sweden. It opened this weekend in the UK and Ireland. It opens on July 9th in Greece, on July 15th in Belgium, on July 23rd in Denmark, the Netherlands and Spain; on July 31st in Finland; on August 14th in the USA; on August 20th in Germany; on August 27th in Australia and on September 17th in Chile.
Posted by Bina007 at 18:53