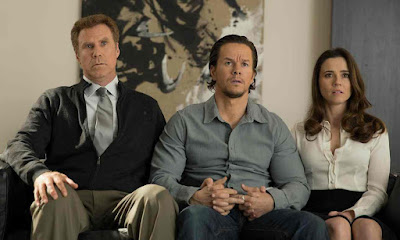 DADDY'S HOME is a comedy from the writers and director of HOT TUB TIME MACHINE and HORRIBLE BOSSES 2. It contains the same kind of raucous verbal humour and physical pratfalls.  Will Ferrell stars as Brad Whitaker - a decent man and earnest stepfather of two kids.  The problems start when their biological father Dusty Mayron (Mark Wahlberg) shows up.  He's more charismatic and popular, even though he actually doesn't have the integrity or care to be a good parent.  At least Brad's wife Sara (Linda Cardellini) understands Brad's pain - she was also sick of being the strict parent when married to Dusty.

The narrative arc is pretty predictable.  The childish father is obviously going to be redeemed but essentially leave the newly blended family in tact.  And in a set up for a sequel, we see Dusty meet the biological dad of his own stepkid by the end of the film.  Still, we don't come to a movie like this for innovative narrative structure.  What makes it work is the verbal and physical comedy and the genuine heart.  Will Ferrell really sells the roll of the loveable geeky stepdad and the budding bromance between Brad and Dusty by the end of the film is kind of sweet. The end may be a little too on the nose for some, but at least you've had more than a few laughs along the away.

DADDY'S HOME has a running time of 96 minutes and is rated PG-13.  The movie is on release in the UK, Canada, Cambodia, Pakistan, the USA, Australia and Ireland. It opens later in December in New Zealand, Egypt, Malaysia, Singapore, Thailand and Vietnam and goes on global release in January.
Posted by Bina007 at 10:02