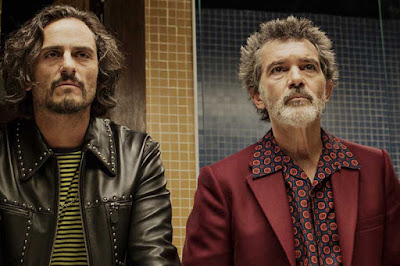 Pedro Almodovar returns to our screens with a beautifully acted, deeply personal film about a director on the verge of a nervous breakdown. His avatar is Antonio Banderas - living in an apartment that exactly matches Almodovar's own clashes of bright colours and crazy patterns - wearing a frizzy spiky hairstyle that matches Almodovar's own.  In this most meta of texts, the director is struggling with psychological and physical pain. He is struggling to cope with the death of his mother, and suffering from tinnitus, chronic back pain, and god knows what else.  Foolishly, he decides to self-medicate with heroin, peddled by an old actor that he infamously fell out with over an early film.  When that film plays in retrospective, and the director runs scared from a Q&A this gives us one of the funniest and darkest scenes of the film.  Anyways, the heroin and the melancholy lead to flashbacks to the director's childhood - one of poverty and precocity.  He is pulled out of that poverty by an indomitable but bigoted mother (Penelope Cruz), and feels the first pangs of lust for the builder he teaches to read and write.  The final act twist takes this memory too far for my liking, but I love the idea that old love can force a reckoning, and an awakening.  In the director's case, he cleans himself up when he meets an old lover, who in turns contacts him when the old actor speaks a monologue inspired by their affair. It's telling that the director wants the play to be anonymous, but meeting the lover forces him to take ownership of his past. From then, reconciliation can begin.

The film is full of love, longing and sadness.  There are laughs, but far fewer than in a typical Almodovar movie.  The mother is not judged harshly - rather there's a lot of love and gratitude between her and her son. It's just that her religion cannot truly cope with her son's gay existence. They live in a kind of mutual lie, speaking openly but also not. Julieta Serrano, playing the mother in old age, gives the most wonderful performance of the film, second only to that of Banderas himself. It's a quiet performance. There's so much pain and fear and regret in a single sigh or look. And yet also the capacity for absurdist gonzo humour when called for. And finally, real joy. He is rightly being nominated for awards and it's a tragedy he's not winning them for a performance that's so moving, and so nuanced.

As for the film, I thought it clever and moving.  At its most meta moments it's quite audacious. But it suffers, as does 8 1/2 which clearly inspired it, for being a kind of portmanteau of memories and key moments and obviously symmetric confrontations.  It doesn't feel organic. It's not meant too. But that did make it feel a bit disjointed to me, and sometimes brought me out of my emotional response to the film.

PAIN AND GLORY is rated R and has a running time of 118 minutes. It played Cannes, Toronto and Telluride 2019 and is now available to rent and own.
Posted by Bina007 at 14:05