YOUR HIGHNESS - Worst. Spoof. Ever. 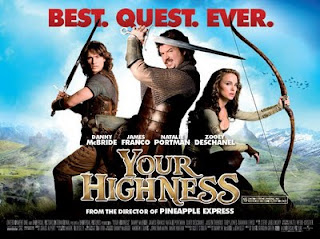 YOUR HIGHNESS is an attempt at the kind of broad, slapstick spoof comedy so brilliantly done by Mel Brooks in his classics, YOUNG FRANKENSTEIN, BLAZING SADDLES and, to my mind, SPACEBALLS. The first problem is that while often as crude, or indeed cruder, than Brooks, it lacks the consistency of good jokes. The second problem is that it lacks a close observation of the material that it's spoofing. Because, as we all know, a spoof is really a kind of love-letter, and the best spoofs are wonderfully detailed in how they take apart genre-conventions. When you watch YOUNG FRANKENSTEIN you just know that Mel Brooks was a great fan of James Whale. Just as when you watch THE HOLY GRAIL, you know the Monty Python team was immersed in Medieval history at school. But in YOUR HIGHNESS you don't really feel that director David Gordon Greene or writer Danny McBride had a soft spot for epic quest flicks. The plot may have the right feel - two princely brothers go on a quest to rescue the elder's abducted bride to be, and fight wizards and ogres on the way. But the detail is all wrong.

So we are left with a movie that is as much of an embarrassment as the caveman spoof starring Michael Cera and Jack Black, YEAR ONE. In fact, it's worse because the cast is of so much higher quality, and many of them featured in one of my favourite flicks of 2008, PINEAPPLE EXRESS. The humour is broad - which is fine - I'm not a snob for elitist intellectual jokes. But they are not funny, and worst of all they aren't really aimed at the genre they are spoofing. Take an early example. Why does the wise old man who directs the quest with his gift of a compass have to be an alien? What does that add? Nowt. Or further along, why does there have to be a bunch of butt-naked cavewomen types? That's not medieval. It's just an excuse to show some tits. Not that I'm against showing tits - but let's at least attempt to have a genre-appropriate reason! What more can I say? James Franco, Zooey Deschanel and Natalie Portman should be thoroughly embarrassed that they chose to appear in this shit. And producers take note: Danny McBride, just like Zach Galiafanakis, is best used in small doses to spice up a movie, rather than being a lead role in which there juvenile aggressive antics will inevitably grate. And directors take note: improvisation works if you're Mike Leigh. If you are writing a joke-filled spoof, make sure the script is nailed down BEFORE you start shooting.

YOUR HIGHNESS was released in the US and Canada on April 8th and in the UK on April 13th. It will be released in Portugal on April 21st; in South Africa on May 13th; in Turkey on June 3rd; in Malaysia and Singapore on June 23rd; in Hungary, Norway and Sweden on July 8th; in Finland on August 5th; in the Netherlands on August 18th and in France on September 28th.
Posted by Bina007 at 22:03