SOURCE CODE - a lot less clever than it thinks it is 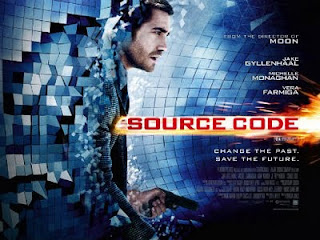 Duncan Jones' directorial debut, MOON was a beautifully crafted, emotionally powerful, low-budget sci-fi flick that was arguably one of the best films of 2009. As a result, his new film SOURCE CODE has been met with a lot of good-will on the part of the critical fraternity and has led to what are, in my opinion, overly generous reviews. Because SOURCE CODE is, essentially, a rather simple-minded, emotionally uninvolving movie full of plot holes, featuring at least one awful acting performance and saddled with a piss-poor Hollywood ending. Overall, it's enjoyable enough as a sort of lo-rent thriller, but it's neither good sci-fi, nor a follow-up film worthy of MOON. I am deeply, deeply disappointed.

The set-up of the film, written by Ben Ripley, is half way between Quantum Leap and that Denzel Washington-Tony Scott time-travel/CSI thriller DEJA VU. Jake Gyllenhaal plays an army officer called Colter Stevens who is parlayed by some sci-fi gimcrack into the mind of a commuter called Sean on a morning train to Chicago. That train is about to be blown up by a terrorist as a warning shot before an even bigger dirty bomb goes off in the city. The army keeps sending Colter back into Sean's body for eight minute segments  to find the identity of the bomber so that he can be apprehended before the second attack. But it is made very clear to Colter that he can't change what's already happened - the people on that train must die - and just because Colter has the hots for Sean's girlfriend Christina (Michelle Monaghan), he can't save her life.

Duncan Jones deftly handles the first half of the film. The repeated eight minutes segments on the train, that repeat in variations, GROUNDHOG DAY style, are never dull. There are some wonderfully innovative tracking shots in the confined space and good use of editing. Kudos also to Jake Gyllenhaal and Michelle Monaghan for giving those segments a sense of urgency and intimacy. But I started to lose interest badly in the second half of the flick for a number of reasons. First up, the first big plot reveal - about how Colter ended up in the Source Code - could be spotted a mile off. Second, if Colter knows the bomber has to leave the train to set off the second bomb, why does he bother interrogating people on the train? Third, the introduction of Jeffrey Wright's Evil Scientist character was just thin two-dimensional writing, and his performance as hammy as hell. Fourth, the character of the army-officer-with-a-conscience was similarly thinly written. And poor Vera Farmiga was simply an age-appropriate delivery device. Fifth, the ending. I think even those who really love this film will agree that there is a natural place where this film should end, and yet it goes on for another five minutes in what I can only assume was a studio intervention.

The upshot - disappointment with what was basically a mediocre thriller with a ham-fisted ending and no real ingenuity in its handling of its sci-fi or emotional material.

SOURCE CODE is on release in Belarus, Kazakhstan, Russia, Canada, the Philippines, Taiwan, the UK, the US, the Czech Republic, Kuwait, Serbia, Bulgaria, Estonia, Iceland, Turkey and Spain. It opens later in April in Portugal, France, Spain, Hong Kong, Hungary, Malaysia, Singapore, Greece, Italy and Norway. It opens in May in India, South Korea, Australia, New Zealand and Finland. It opens on June 2nd in Germany; on June 9th in the Netherlands; on June 16th in Denmark and on August 5th in Sweden.
Posted by Bina007 at 19:57