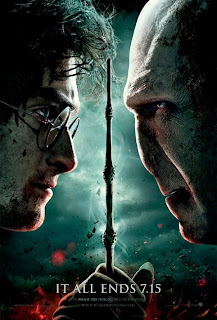 After the turgid teen-moping of DEATHLY HALLOWS PART 1, it comes as quite a relief to see the HARRY POTTER franchise close with what is essentially a two-hour epic battle between good and evil. Director David Yates' DEATHLY HALLOWS PART 2 is visually stunning, beautifully constructed, and never falters in pace or tone. Indeed, in its tight pacing, Steve Klove's adaptation beats J.K.Rowling's baggy source-novel hands down.

It feels somewhat superfluous to provide a plot summary for one of the most popular children's books of all time, but for those of us who read the book on release and have since forgotten the mechanics of the ending, here it is. The movie takes place in contemporary England, where ordinary people live unknowingly alongside a world of magic. Young wizards are trained at a boarding school called Hogwarts, and older wizards are governed by the Ministry of Magic. But over the past seven films, we have seen the world of good magic over-turned by the reappearance of the evil Voldemort - a former Hogwarts pupil - with a particular vendetta against our improbable hero, Harry Potter. We pick up the story with Harry Potter and his side-kicks, brainy Hermione and loyal Ron, on the hunt Horcruxes - the magical objects into which Voldemort poured his soul. If the kids can kill the Horcruxes they can save the world from a reign of Black Magic; their school from a fierce magical battle; and Harry from a fateful confrontation with his nemesis.

The resulting film opens as a kind of heist movie, with Harry and co. breaking into Gringotts bank on the hunt for a horcrux, but pretty soon we are back at Hogwarts and into the final battle which absorbs the vast majority of the run-time. The visuals are simply stunning. I have always been impressed by the make-up and CGI effects that transform Ralph Fiennes into the snake-like Voldemort, but the image of his foetus-like horcrux was incredible and unforgettable. And Hogwarts is evocatively photographed in murky gloom (yes, even without those awful and unnecessary 3D glasses), and is hauntingly battered and bruised by the final act. We are basically in the realms of a war movie - and the producers do not shy from showing us death and destruction. The post-battle scene, with nurses dressed in WW1 style costumes, was both deeply affecting - as well as deeply British - as they all sit around and have a nice cup of tea!

Perhaps the biggest surprise of the film is that the main characters are rather over-shadowed by Professor McGonagall's "Once more unto the breach dear friends, once more"-style battle-cry and Matthew Lewis' scene-stealing turn as Neville Longbottom. Indeed, on the back of his appearance in this film, 6 foot tall and looking for all the world like a young Clive Owen, one can't help but suspect that he might have a brighter post-Potter future than Daniel Radcliffe and Rupert Grint!

If I had any difficulty with the film, it was the use of 3D. I didn't feel that it added anything, and enveloped an already hauntingly dark film in yet another dark veneer. My other two problems rest with the book rather than the film, which after all, has to be faithful or risk disappointing the fans. I continue to believe that J.K.Rowling lost her gumption when it came to Harry's final choice - that there was a darker but more satisfying ending that she could've written. And I rather felt that Neville Longbottom was short-changed in the epilogue.

HARRY POTTER AND THE DEATHLY HALLOWS: PART 2 is released globally on July 15th.
Posted by Bina007 at 21:41