iPad Round-Up 4 - SEASON OF THE WITCH 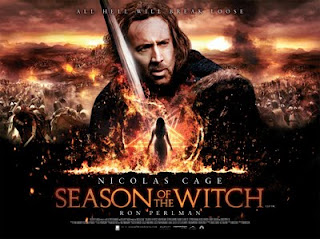 Evidently, the Nic Cage crusader-slash-religious-hysteria flick SEASON OF THE WITCH is a bunch of ridonkulous hokum. The key question is whether, like SOLOMON KANE, it manages to embrace its pulpy traits to become a truly entertaining piece of work. The sad answer is, "a thousand times No". SEASON OF THE WITCH is a confused, sub-par piece of hammy genre entertainment, in which Nic Cage is disappointingly not as crazy as he was in BAD LIEUTENANT.

The plot is pretty simple.  Nic Cage and Ron Perlman are 14th century Crusader knights who, despite battling for their Christian Kings, end up falsely accused and on trial for their lives. Thus newly sensitised to the cruelty of arbitrary justice, they journey home through a plague-infested land.  A monk charges them to deliver a Witch to an exorcism designed to rid the country of the plague, but of course Nic Cage's Knight wants her to have a fair trial. And, after all, we sort of think that the plague might be caused by a travelling salesman with infected reliquaries rather than an innocent girl attracting unwanted attentions. That said, as Roger Ebert points out in his review, the film's post-modern cultural sensitivity is somewhat undermined by the fact that the poor girl doesn't even get a name!

The look of the film is sort of lo-rent Conan slash Coppola's highly colour-coded Dracula with battle scenes from the Ridley Scott school of loud noises and incomprehensible editing. Lots of over-wrought CGI backdrops, mud and sweat, but not much actual inspiration or imagination. DP Amir Mokri (TRANSFORMERS 3, FAST & FURIOUS) obviously long since sold his soul to Michael Bay and is probably a better candidate for  salvation-by-exorcism than the poor girl. And as for Director Dominic Sena, where's the visual wit and verbal cheekiness that enlivened SWORDFISH?

SEASON OF THE WITCH went on global release in January through March. It is currently on release in Italy and opens in Japan on July 30th. It is also available to rent and own.
Posted by Bina007 at 21:17