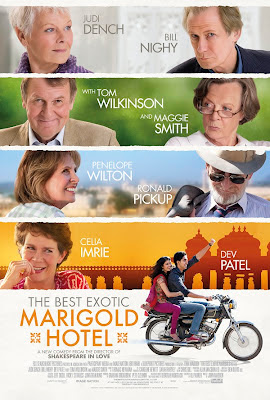 THE BEST EXOTIC MARIGOLD HOTEL is a movie of questionable taste and worse political judgement.  It's a testament to its charming cast that it manages to slip down rather easily, all the same.


The basic concept is that a bunch of middle-class English pensioners move to a ramshackle Rajasthani hotel and experience epiphanies. The recent widow (Judi Dench) learns independence; the retired civil servant (Bill Nighy) and his wife (Penelope Wilton) learn that they do not love or even like each other; the two desperate singles (Celia Imrie and Ronald Pickup) learn that are still sexually attractive; the racist (Maggie Smith) learns tolerance; and the gay high court judge (Tom Wilkinson) finds peace.

The problem with the film is the typical problem that modern England has in viewing its colonial heritage. On the one hand, it simply has to acknowledge the dirt, disease, discrimination and general chaos of modern India. On the other, it is faintly embarrassed of this disapproval given its own guilt regarding the Raj, and still has a deep-seated love of the country whose culture, language and cooking have so influenced the home nations. The result is a depiction of India that is at once patronising and awe-struck.  India is the country of spiritual revelation and ancient wisdom.  But it is also depicted as a country of almost child-like innocents who believe in happy endings, ideally set to a musical number.  This absurd juxtaposition is best summed up in the movie SLUMDOG MILLIONAIRE - marketed as a "feelgood movie" despite scenes of child beggars deliberately blinded, capped off with the obligatory song-and-dance number straight after a scene where the hero's brother has shot himself.

THE BEST EXOTIC MARIGOLD HOTEL isn't quite as crass as SLUMDOG MILLIONAIRE. And indeed, in one storyline, we see a reconciliation between ruler and ruled played out as a reconciliation between two homosexual lovers - one a colonial, one an Indian. That at least shows some self-awareness on the part of the film-makers, although it falls far short of the kind of self-examination seen in the novels of E.M.Forster.  But at the end of the day, this is just another movie in which India is a colourful, exoticised backdrop against which pampered Westerners can gain "self-knowledge".  There's no real concern with what life there is really like. And the self-knowledge is easily gained - in the case of Maggie Smith's character, the personality alteration so swift as to beggar belief.

Still, as I said, the movie is a surprisingly pleasant watch, mainly because it's cast is top-notch and charming, partly because where the movie is on "home soil" it is actually quite insightful.  In other words, when focusing on the disappointments of old age, the movie actually has interesting things to say about the way in which the middle classes are seeing their pension income eroded - their healthcare costs increase - the shock to discover the welfare state and corporate pension simply aren't enough - the indignity of realising one's sex life might be over - the desperation of knowing that the chances to turn one's life around are limited, if they exist at all.

THE BEST EXOTIC MARIGOLD HOTEL is on release in the UK and Ireland. It opens on March 15th in Germany; on March 22nd in Australia; Norway, the Netherlands,  New Zealand, Russia, Estonia, Finland, Spain and Sweden; on March 28th in Belgium; on March 20th in Italy and Lithuania; on April 12th in Portugal; on May 4th in India and the USA; on May 9th in France; on May 11th in Brazil; on May 17th in Hong Kong and Singapore; and on May 24th in Argentina.
Posted by Bina007 at 20:30