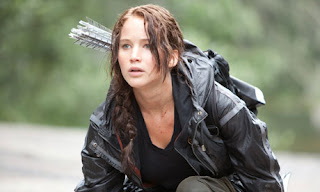 HUNGER GAMES plays like a po-faced, de-fanged version of RUNNING MAN and BATTLE ROYALE. In a dystopian American future, the tyrannical 1 percent demand each district volunteer two kids to fight to the death in a gladiatorial reality TV show. Predictably, the two kids from the poorest district work together to game the system and survive - the only spin being that they become as manipulative as the game they are in to succeed - feigning teen love (or are they?! - who cares) to win public sympathy.  Clearly, the franchise, based on a trilogy by Suzanne Collins', is gearing up for a finale in which the triumph of the 99th percentile inspires a revolution of the Plebs. Which begs the question why, with all their technology, cash, and cunning, the 1% allows them to survive so long. Frankly, any ruling elite so utterly incompetent deserves to die by dingleberries. Dr No, sorry, Snow, is giving us a bad name.

Anyways, what can we say about this film. It has less pretty lead actors (Josh Hutcherson, Jennifer Lawrence)than the Twiglet series but equally pitiful dye jobs.  (Picture the Celebrity Death Match between Josh Hutcherson's blonde highlights and Twiglet's Nikki Reed!) The acting is better in THE HUNGER GAMES, basically because Jennifer Lawrence can communicate so much nuanced and conflicting emotion without saying a word. But this is offset by some truly shitty production and costume design - so over-the-top, so absurd, that it looks cheap and trashy and completely undermines the attempt at portraying earnest emotion. The worst victim of this is poor Elizabeth Banks in what one can only call the Parker Posey Memorial Role, as inspired by Helena Bonham Carter. By contrast, Lenny Kravitz hardly looks like he's trying at all, and one can imagine an hilarious conversation between the rock musician and the make-up department where he just refuses to go with it. Finally, the direction (Gary Ross - THE TALE OF DESPEREAUX) is also pretty pedestrian.

But my real problem with the whole show was its hackneyed premise coupled with a pretty superficial use of Roman names and concepts.  The world really just doesn't need a desaturated RUNNING MAN. It's like the whole problem with Twiglet: vampires who don't have sex are about as compelling as a Death Match where studio economics require a PG-13 certificate, so that all violence happens off-screen. Apparently the books are more savage, which is great, but then again, Suzanne Collins does try to palm us off with a kind of lo-rent tipping-of-the-hat to Rome.  Clever, clever to call a food deprived land "Panem", and to keep the plebs happy with circuses, but you just can't call major characters Cinna and Caesar without following through. It all felt highly disrespectful coming from a woman who purports to have serious influences. Moreover, where's the subtle satire on reality TV? Where's the subversive politics? The film seems to pick up so many interesting, dangerous concepts, but doesn't seem to have the balls to follow them through.  Oh, and one final thing.  Why give your heroine a name that sounds like "catnip"?