ALL IN GOOD TIME 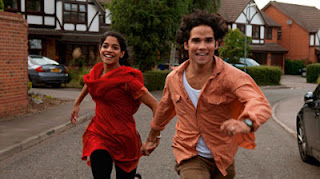 ALL IN GOOD TIME asks you to suspend your disbelief that a young couple could reach their wedding night as virgins.  It tries to make this easier by setting the film in a second generation Asian community.  As a member of that community, I was still incredulous.  Still, if you can force that issue from your mind, what you get is a genuinely funny, rewardingly spiky bittersweet drama about love - between husbands and wives, and parents and children.  These issues - miscommunication, the setting of boundaries - make this a movie with far wider appeal than a specialist Brit-Asian film.

For the first half of the film the movie is a solid comedy and centres on the young virginal newlyweds, Veena and Atul, trying to get their end away in a cramped family home. But as we move into the second half of the film we the comedy dissolves into drama, as their marital difficulties prompt their parents to reconsider what their early married life was like, and what married life has settled into. I love how even in the early, explicitly funny laugh-out-loud scenes, we can always see the undercurrent of tension, and that even in the second half of the movie, which is far more emotionally tense, we still get wonderful flashes of humour. This speaks to the skill of the two playwrights - Bill Naughton of the original and Ayub Khan Din's adaptation. And I particularly admire the director, Nigel Cole (MADE IN DAGENHAM) choosing to end on such a conflicted, bittersweet note.

The casting is good all round. Vina (Amara Karan - ST TRINIANS) and Atul (Reece Ritchie - PRINCE OF PERSIA) are suitably gauche and sincere.  Meera Syal is brilliant as always, as Atul's mother Lupa. But it's Harish Patel as his father Eeshwar who steals the movie. As in BRICK LANE, it falls to Patel to play a character who is at once ridiculous but also deeply felt, and the emotional anchor of the piece.  He is quite simply outstanding.