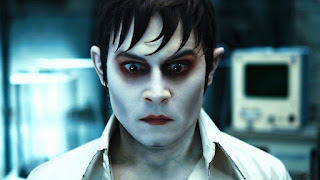 When was the last time Tim Burton made a half-decent movie? 2005's CORPSE BRIDE? Well that was animation.  1994's ED WOOD?  And yet I think of myself as a massive Tim Burton fan.  Maybe it's just because I like the idea that in the botoxed, day-glo Wood that is Holly, there is still room for a camp-goth weirdo.  But I guess, like an abused wife, it's time to realise that he may tell you he loves you, and that he's sorry, and that it won't happen again, but that you have too much self-respect to go back yet again to hurt and disappointment.

Am I over-reacting? Maybe. But the mind-boggling stupidity of DARK SHADOWS - the two hours of grating boredom -  have unleashed two decades of pent-up anger, sorrow and regret.  Tim Burton used to be radical. He used to be subversive.  Now he's just predictable, banal and worst of all, aimless. Where once there was auteur vision, now there's just a shapeless, nonsensical mess.

DARK SHADOWS may well be worse than JOHN CARTER.

Ok, so let's take a moment, calm down, and start this review again.  Once upon a time a long time ago, there was a camp-horror TV series called "Dark Shadows".  Tim Burton, Johnny Depp and Michelle Pfeiffer fell in love with it. It centred on a 17th century guy called Barnabas Collins, living in then-contemporary 1970s Maine with his formerly rich, impoverished, odd-ball family.  Clue lots of fish-out-of-water comedy, and some good old hammy romance-vengeance as the witch who originally cursed Barnabas continues to purse him.

In this remake, which was can only presume is loving and a fan-fic, Depp takes on the role of Barnabas, Pfeiffer the current matriarch and Eva Green the witch, Angelique.  The film is, as one would expect, beautifully designed, with the exception of Green's shockingly bad blonde wigs. (Second only to Cersei's bad wigs in HBO's Game of Thrones, season one.)

The problem is that the story zigs and zags with no apparent logic.  The movie is tonally all over the place. Is it a spoof? A straight comedy? Is it even trying to be spooky at all? Some characters are under-used and under-developed (poor Jonny Lee Miller as Pfeiffer's brother is a case in point).  Other characters have major plot reveals that are dictionary definitions of non sequitors (Chloe Moretz as Pfeiffer's daughter).  And the key romance between Barnabus and a contemporary nanny just has no emotional purchase on us whatsoever.  This movie is a mess. And not a mess in the manner of a quirky indie movie, whose rough edges are part of its charm.  A mess that is frustrating and boring to endure.

DARK SHADOWS is on global release everywhere bar Argentina, Brazil, Colombia and Mexico, where it is released on June 22nd.
Posted by Bina007 at 17:21