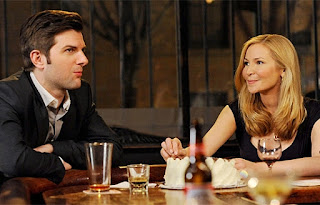 FRIENDS WITH KIDS, like FRIENDS WITH BENEFITS, is a movie that wants to seem transgressive and "real" but can't resist it's Hollywood rom-com ending.  The result in both cases is a rather banal 2 hour wait for the hero and heroine, so obviously in love with each other, to realise it at the same time, allowing a conventional loved up ending.

The opening is promising.  Jason (Adam Scott) and Julie (Jennifer Westfeldt) are two singletons in a group of friends that have had kids, and are blissfully smug about how their friends are just tired, frustrating kid-centric banalities.  Of course, this movie, written and directed by Jennifer Westfeldt, doesn't have the balls to really examine what would happen if you rejected that lifestyle, but instead decided to make the two singletons unite to have a baby, while trying to date independently.  Of course, as soon as the baby is born they both find what they might have previously thought was their Ideal 0 he gets the young hot chick (Megan Fox) and she gets the sensitive nice guy (Ed Burns). But because the movie can't end after an hour, Julie has to realise she's in love with Jason a few years before he reciprocates her feelings.  As if that were ever in doubt.

The movie is not without its delights.  There are a few scabrous and raucous scenes - typically involving John Hamm and Kristen Wiig as a deeply unhappy couple.  But the movie just isn't as transgressive as it thinks it is, and it's about as authentic as Chris O'Dowd's American accent.  The second hour really is a struggle too wade through.  In short, just another will-they-won't-they-oh-please-get-on-with-it rom-com.  I'm sad to say that Jennifer Westfeldt has form with this.  She pulled the same tease in KISSING JESSICA STEIN, a rom-com in which a girl thinks she's gay - which is a really interesting set up - but the movie then devolves into banality.  Not a director who's work I'll be seeking out in future.

FRIENDS WITH KIDS played Toronto 2011 and was released earlier this year in the USA, Greece, Israel, Sweden, Russia, Mexico, Portugal, Brazil, Australia, Peru and Slovenia. It opens this weekend in the UK, Ireland, Finland and Serbia. It opens on July 5th in the Netherlands, July 12th in Argentina nad Bulgaria, August 1st in France, August 22nd in Belgium and Chile, on September 5th in Hong Kong and on November 9th in Turkey.