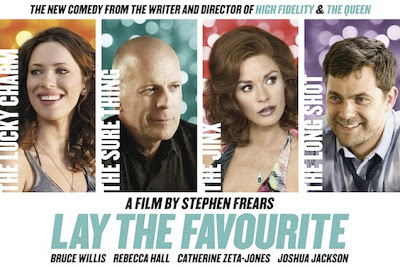 Stephen Frears is a perplexing director, who has gone from auteur indie director in the 1980s (MY BEAUTIFUL LAUNDERETTE) to a director-for-hire of bland, rather mediocre films with no consistent theme (THE QUEEN).  He turns up here, helming LAY THE FAVORITE, a movie based on the real-life story of Beth Raymer, a stripper turned bookmaker's runner, who got mixed up in illegal gambling.

As played by Brit Rebecca Hall, Beth is a sweet, comical, blowsy stripper-with-a-heart, and is it turns out, a cool head for figures. Hall's accent is high-pitched and pitch-perfect - a kind of believable version of Mira Sorvino's Woody Allen stripper.  She comes to Vegas for a better life and ends up book-running for Bruce Willis' typically laconic legal bookie, Dink, much to the chagrin of Dink's insecure wife Tulip (Catherine Zeta-Jones). This gives rise to the one good tragicomic joke of the film - Dink can take Beth back as a runner so long as his insecure wife can have a face lift.  But of course, it doesn't work out and in the second half of the film Beth moves to New York and works for Rosie (Vince Vaughn, also playing himself).   Trouble is, Rosie is operating in a jurisdiction where gambling is illegal, and poor naive Beth is laying herself open to trouble.

Of course, all ends well. It's that kind of movie. Day-glo bright, in which a young pretty girl will be mildly exploited  but ultimately cared for by good kind people. There's none of the dirt and danger and darkness of a movie like 21, and no real attempt to explain to viewers exactly how the system works. The result is a movie that is, at best, light and frothy. Another opportunity to see Vince Vaughn do his motormouth schtick that he's been doing since SWINGERS. But it's ultimately forgettable and hardly worth the candle.

LAY THE FAVORITE played Sundance 2012 and opens this weekend in the UK and Ireland. It opens on July 19th in Germany, on August 8th in France, on August 23rd in Denmark, on September 7th in Turkey, on November 2nd in Estonia, on December 7th in the USA,  on January 13th in the Netherlands and on March 28th in Russia.