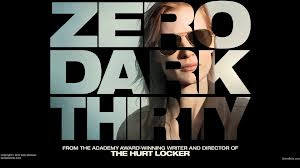 It's taken me a while to get the necessary distance to review Kathryn Bigelow's controversial but critically acclaimed CIA procedural thriller, ZERO DARK THIRTY. The movie is meant to be an account of how US intelligence tracked down Osama Bin Laden, ending with a recreation on the fatal raid on his house in Abbotabad.  But it goes further than just being a fiction inspired by facts, as Tony Kushner would claim for the scrupulously researched LINCOLN.  Rather, Bigelow's movie opens with a statement of aggressive alignment with the truth, before playing real telephone calls from the Twin Towers.  So, before we even see an actor on screen, Bigelow has asked us to take her movie as THE definitive truth, and emotionally manipulated us by playing harrowing real audio from Bin Laden's most devastating terrorist attack.

We then move into the first two hours of the film, which is basically a standard police procedural, except that it features copious quantities of torture, which are shown to provide the information that leads directly to Bin Laden. Jessica Chastain is perfectly cast as Maya. She looks vulnerable and slight and this nicely contradicts her determination to the follow a slight lead despite her superiors' scepticism, even to the point of participating in graphically and unrelentingly depicted torture.  Of course, one can see Bigelow's not too thinly veiled metaphor for a female director's struggle in Hollywood, and every scene of genuine peril or tension is offset by the scenes of clichéd struggle against The Man. Did the real Maya theatrically and childishly use a marker to chalk up how many days the CIA knew about Abbotabad and refused to act?  Would a character as senior as Mark Strong's director really unleash a standard macho shouty tirade at his team?  It all felt rather written by rote. This was most evident in the sequence where a colleague of Maya's arranges a meeting with a potential lead - a meeting that is built up to be tense but where I was always aware of its dramatic purpose and obvious consequences.

The part of the movie that worked best for me was the final half hour, where Bigelow meticulously depicts the raid on Abbotabad, showing great technical accomplishment in her use of night vision equipment in conjunction with standard camera lenses, working in zero natural light.  I also respected the discretion with which she hinted at, but did not show the death and body of Bin Laden. And perhaps the  most finely judged dramatic moment of the film is the final shot, where Maya, mission accomplished, is left with the horrible existential, deeply political question "where do you want to go?"

The problem is that ZERO DARK THIRTY only deals in such political and moral sophistication in its final scene.  Up to that point, we are in no doubt that it is torture that produces the information that leads to Bin Laden.  For Bigelow, and her screenwriter Mark Boal, to suggest that they are just neutrally depicted "what happened" is disingenuous.  This is problematic.  Not only because it severely streamlines and simplifies a very complex issue, but because movies do not exist in a social and political vacuum as pure works of art with no consequences.  I am unsurprised to see the CIA measured but clearly angry denial that this is an accurate portrait of the hunt for Bin Laden, and to say that the content of this film will be inflammatory in certain quarters is an understatement.

ZERO DARK THIRTY is on release in the USA, Spain, Canada, the Philippines, Taiwan, Portugal, Macedonia, France, Juwait, the Netherlands, Singapore, Finland, Ireland and the UK. It opens on January 31st in Belgium, Argentina, Australia, Germany, Israel, New Zealand, Lithuania, Sweden and Turkey. It opens on February 8th in Denmark, Italy, Estonia, Iceland, Norway and Poland. It opens on February 15th in Brazil and Japan; and on February 22nd in Chile, Greece, Hong Kong, Hungary, Russia and Bulgaria.

ZERO DARK THIRTY is rated R in the USA and has a running time of 157 minutes.