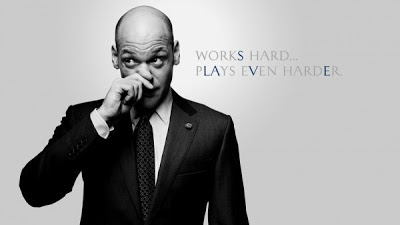 PLOT SUMMARY:  Gubernatorial candidate Peter Russo (Corey Stoll) goes on a bus campaign in Pennsylvania. At first he is undermined by the Vice President, but on Frank's advice flatters him into the fold. Back in Washington, reading a thinly veiled morality lesson from Janine (Constance Zimmer), Zoe (Kate Mara) dumps chief whip Frank Underwood (Kevin Spacey). In retaliation  he withholds political scoops, until she resumes their transactions.

Meanwhile, Frank tries to shepherd Russo's Watershed Bill through Congress despite Sancorp's heavy lobbying against it. Claire secretly scuppers the Bill in order to win Sancorp's help for her charity, when Frank fails to pull the necessary strings at State. Finally, Frank's chief of staff, Doug, gets the hooker, Rachel, her old job as a waitress back.

COMMENTS: I'm happy to see Frank back to his day job of scrambling the votes to get a bill through Congress. He has some superb lines: "I've often found that bleeding hearts have an ironic fear of their own blood," and "I can't lie: I despise kids. There, I've said it."  But he also has some duds. "Never slap a man while he's chewing tobacco." What does that even mean?

As he breaks the fourth wall, he protests that he doesn't care about being dumped by Zoe, but I can't help but think his argument with Claire is a direct consequence of this. It's shocking to see such a tight career couple arguing, and one wonders what the ruthless Clare will do to him in return. Well, it turns out she screws him over. Is this turnaround from ideal career marriage plausible? I guess so. Their relationship has also been transactional.  So long as they both benefited equally it worked, but with Frank pulling rank over her projects, she fought back.   I wonder what Claire is thinking at this point.  Does she realise that Frank will be able to trace the defeat back to her?  He'll identify the "No" voters, berate them, and they will protest that Claire said he wouldn't mind.

In a sense, Frank's marriage is therefore as transactional as his relationship with Zoe. Although one wonders if Claire and Frank even sleep together. As a side note, am I reading too much into the fact that Zoe calls Frank "Francis" for the first time - something that only Claire does - after she dumps him?

Finally, I don't really understand what Doug is still doing with the hooker. I hope it doesn't turn out to be something hokey, like she's Frank's illegitimate child.  All this heavy-handed talk of kids - Frank despising them; Claire sympathising with them; the President's chief of staff neglecting them; Gillian pregnant - is foreshadowing something....

Overall, I loved the pace, the tension and the ambiguity of this episode.  It's no surprise to find that it was directed by James Foley of GLENGARRY GLEN ROSS fame. (Put the coffee down!")  And I loved the final line, "I want to know who lied".  Best episode in a while.
Posted by Bina007 at 16:14