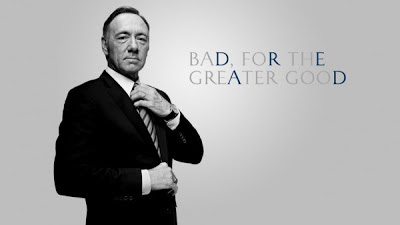 PLOT SUMMARY: Congressman Frank Underwood (Kevin Spacey) goes to his alma mater in Charleston, a military college that's a thinly veiled version of The Citadel, for the dedication of his Sancorp sponsored library. He gets nostalgically drunk with his old friends, one of whom he may have had a homosexual affair with.  Claire (Robin Wright) travels with him, and while calling Adam Galloway (Ben Daniels) discusses her decision not to have children.  Meanwhile, recovering addict and gubernatorial candidate, Peter Russo (Corey Stoll) goes back to Philadelphia, only to be rebuffed by both is mother and the shipyard workers. Eventually, Peter is able to win their tentative support.

COMMENTS: Once again, I find that when House of Cards leaves Washington, the pace slackens and the focus drifts.  These kinds of extended scenes away from the action only work if they serve to deepen our understanding of the characters.  I'm afraid that the Charleston scenes don't really add much.  The hint at a homosexual affair seems ill explored and there for a shock value that isn't really carried through. "You meant something to me" - oh, for heaven's sake, have the balls to say it. The same goes for the clumsy way in which the questions about biological children is introduced to Claire's conversation with Adam. Is she a beard? As for Peter's scenes on the docks, it made me realise how much more grounded and authentic The Wire's depiction of the dockers was, and how two-dimensional and basically uncaring this version is.
Posted by Bina007 at 14:58