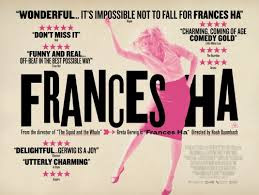 For the written review, well, keep reading! But for the podcast review, either listen directly below or subscribe to Bina007 Movie Reviews in iTunes.
Sweet tap-dancing Christ, but FRANCES HA annoyed me. It's exactly that kind of precious, self-aware smug hipster movie that riles me, in exactly the same way as HBO's Girls riles me.  We are meant to be charmed and empathetic toward these flakey, twentysomethings with their great books college degrees who studied semiotics and thinks that life owes them a living. And why oh why is "investment banker" always a lazy shorthand for the soul-less putz who puts up with this shit and pays the bills?  I don't find this behaviour - lazy, narcissistic, delusional - charming. And even if I did, I wouldn't want to watch it for the 86 minute runtime of this movie.  And I'm not buying the idea that just because you filmed it in black and white it's deep and meaningful.
But let's take a breath and look at what we have here.  FRANCES HA is a movie written and directed by Noah Baumbach, who made the stunningly good THE SQUID & THE WHALE and the more sporadically successful MARGOT AT THE WEDDING and GREENBERG.   The latter film starred Greta Gerwig, the charming actress who plays, well charming characters who win our hearts even as they're being doormats (GREENBERG), obnoxious (DAMSELS IN DISTRESS) or flakey (FRANCES HA).  In GREENBERG and DAMSELS, the movies worked largely because Gerwig is just one of those people that you're happy to spend time with.  And the fact that I didn't walk out of FRANCES HA is largely thanks to the fact that she is pretty charming even when she's being utterly irritating.
So what's it all about Alfie?  It's about the friendship between college best buddies, Frances (Gerwig) and Sophia (Mickey Sumner).  That friendship is tested when Sophia does what late twenties girls do - gets a series job, gets an aspirational apartment and gets a fiancée.   Meanwhile, Frances is stuck as an apprentice modern dancer with no real steady income and no real hope of won.  The fact that she's impressed with the fact that she even asks for more work sums up the low bar she has set herself - and even then she ends up a loser.  So that's it.  For the first hour of this flick we watch Frances fail, and infuriatingly never really deal with that, just telling herself and her friends lies about how she's doing okay.  And then there's a crisis and a resolution neither of which I think are particularly credible.
Here's the basic level at which this movie doesn't work.  You know how Sofia Coppola so brilliantly and effortlessly captures how young girls are in each other's company?  There are a number of scenes where Baumbach tries to establish the same intimacy and freedom between Frances and Sophia, but it always comes off as stage-y rather than authentic.  And if you don't believe in their friendship, then the whole dramatic love story played as platonic friendship just doesn't work either. Of course, one let out could be that Baumbach is trying to show us how Frances sees her own life - mythologised, romanticised, a series of beautifully staged montages.  But I suspect that the movie isn't as clever as all that.
I think the simplest conclusion is that if you are someone who likes HBO's Girls, and thinks Lena Dunham is the voice of your generation, then this movie is for you.  I would rather just watch MANHATTAN or ANNIE HALL and be done with it.
FRANCES HA has a running time of 86 minutes and is rated R in the USA and 15 in the UK for strong language and sex references.
FRANCES HA played Telluride, Toronto, New York, Berlin and host of other festivals in 2012.  It was released earlier this year in the USA, the Netherlands, Russia and Canada.  It is currently on release in Belgium, France, Poland and Israel. It opens in Poland on July 19th, in the UK and Ireland on July 26th, in Germany on August 1st, in Sweden on August 16th, and in Iceland on September 6th.
Posted by Bina007 at 22:07