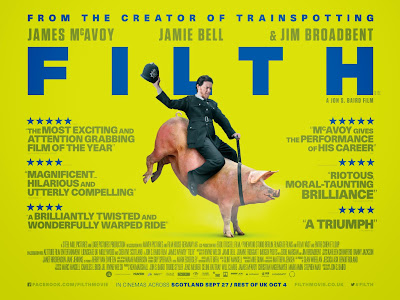 Irvine Welsh's Filth was a novel of characteristic brutality and dark humour - depicting corruption, drug abuse, sexual perversion and decadence in contemporary Scotland with an unflinching stare and a complex prose style.  Notoriously, part of the novel was narrated by the tapeworm living inside of police officer Bruce Robertson's abused gut.  Hilariously, the tapeworm later becomes sentient and helps us diagnose the true root of Bruce's current emotional breakdown.

Writer-director John S Baird's approach to the novel is one of courage in taking on the grim subject matter, with barely any concessions to the censors, as well as a pragmatic and inventive approach to solving the tapeworm problem. Rather than trying to do some kind of bizarre POV a la Terry Gilliam, he's given Bruce a nutty psychiatrist, Dr Rossi, who in surreal nightmarish visions does much of the work the tapeworm did, with some nice visual pointers for the book fans.  The result is a movie that is loyal to the spirit of the novel but understands that to make a coherent film you sometimes have to make drastic changes.

So, on to the meat of the film.  Bruce Robertson (James McAvoy) is a nasty corrupt drug-addled cop determined to screw over every departmental colleague in his mission to get promoted. That said, his sense of dark mischief doesn't extend to making trouble for some concrete end - he'll happily taunt his best friend's wife with sexually harassing phone calls, or spike said friend's drinks with drugs and leave him freaking out in a hotel room, for no reason at all.  As the movie progresses, we realise that there is some cause to this malevolence - or perhaps causes - rooted in an unhappy home life in the past and present (isn't it always!)  Thank god the movie makes all of that sound far less hackneyed than the description just sounded.  And even when the movie introduces a character explicitly designed to make Bruce question his morality, it doesn't give him an easy out.

The framing device for the film is the investigation of the murder of a kid by a group of nasty violent teens in an underpass.  The irony is that despite his deeply unethical methods, Bruce is actually apparently fairly good at investigating the murder - apparently.   But let's be honest, that's not what this movie is really about. It's a character study - or a study of Bruce's psychosis - a study of just how far a human being will descend into mayhem in order to avoid the truth.   And in amidst all that, we have lurid, sleazy, darkly funny visuals and cameos - John Sessions as the homophobic head of department who dreams of writing screenplays - Shirley Henderson as the deliciously sex-starved middle-class wife throwing herself at her phone stalker - and of course Eddie Marsan as her husband, the repressed accountant.   But really, this movie belongs to James McAvoy who throws himself into an incredibly challenging and provocative role and is utterly compelling throughout.  It's his real emotional trauma that keeps us anchored in a movie that would otherwise be a confusing and alienating mess of nastiness.

FILTH has a running time of 97 minutes.

FILTH opened earlier this year in the UK, Hungary, Ireland, Austria, Germany, Switzerland, Serbia, Slovenia, Finland and Japan. It opened last weekend in Australia and New Zealand. It opens in Lithuania on December 6th, in Estonia on December 13th and in the USA in 2014.