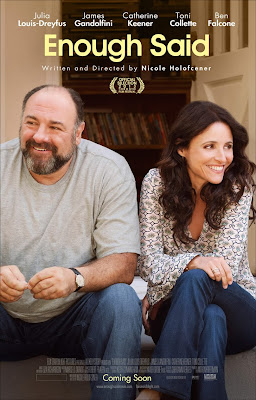 Nicole Holofcener is an American writer-director who specialises in brutally honest, sometimes brutally unpleasant films about women of a certain income in California. I had some issues with her last film, PLEASE GIVE, which could be described with the hashtag onepercentproblems, and if I, greedy capitalist bastard that I am, found it self-involved, imagine what everyone else must have thought.

The good news is that her latest film, ENOUGH SAID, is far more heart-warming while sacrificing none of her authentic observations of women-of-a-certain-age.  Perhaps that has something to do with casting James Gandolfini and Julia Louis-Dreyfus - two of the most charming and likeable actors.  Or perhaps it just has something to do with accepting a more conventional high-concept rom-com conceit.

The movie focusses on Eva (Louis-Dreyfus), a middle-aged masseuse whose beloved daughter Ellen is about to leave for college.  She starts dating schlubby Albert (Gandolfini) but sabotages the relationship when she realises that one of her clients is his ex-wife Marianne (Catherine Keener). Rather than dump the client or confess to Albert, Eva just can't help but ask the ex what went wrong, and Marianne's jaundiced view of Albert becomes contagious.

To be honest, the chamber comedy aspect of this film - Eva hiding behind a bush to avoid meeting Marianne and Albert's daughter - the final reveal that she knew all along - is  the least satisfying part of the movie.  What really holds our attention is the finely observed and heart-warming depiction of the insecurities of middle-aged dating and the way in which parents fear their children leaving home. In fact, there were times at which I wished the side plot had more room to breathe - the way in which Eva subsconsiously fills her time with her daughter's lonely best friend was so tragic and real it broke my heart.

So what are we left with? Nicole Holofcener's most approachable film, full of human truth, if saddled with a rather clumsy conceit. Gandolfini and Louis-Dreyfus are a pleasure to spend time with, and it's so sad that this is Jim's last film.

ENOUGH SAID has a running time of 91 minutes and is rated PG-13 in the USA.

ENOUGH SAID played Toronto and London 2013 and was released earlier this year in the USA, Canada, the UK, Ireland, Turkey, Mexico, Israel and Singapore. It is currently on release in Australia. It opens on November 29th in Poland, on December 5th in Greece, Hungary, Brazil and Lithuania, on December 19th in Germany and Spain, on January 15th in France and the Netherlands and in Italy on April 10th.
Posted by Bina007 at 19:25