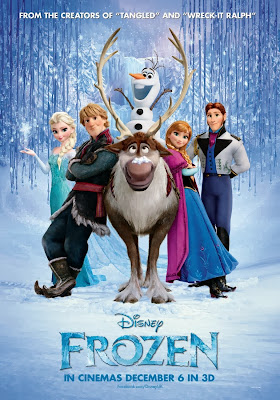 FROZEN is as delightful as it is intelligent - the best Disney film since BEAUTY AND THE BEAST and the only Disney film that passes the Bechdel test. Finally we get a film about Princesses where being a Princess isn't really the key point - a film about women who learn to be confident in themselves and protect each other - a movie that thoroughly de-constructs the Disney mythos.

Of course, I didn't know all that when I walked into the cinema, depressed by the cricket and searching for some light entertainment. In fact, I pretty much hated this movie for the first twenty minutes of its runtime.  It seemed to conform to every Disney stereotype about beautiful but isolated orphaned princesses, defined entirely by their relationships with their absent fathers and handsome lovers.  The kingdom of Arendelle seemed like a place created by the Disney of the 1940s and 1950s - it felt like SHREK had never happened.

Or so I thought.  That was before FROZEN broke every cliché it had so skillfully set up - to create a movie that's better than a lampoon, because it actually has positive values that it espouses.

So here's the deal. Princess Elsa is the snow queen of fairytale legend.  When she was a little girl her powers almost killed her little sister Anna, so her parents locked her up until she could control her powers.  Her life is one of suppression and repression until her coronation day when a furious argument with her un-comprehending sister sparks an angry icestorm of epic proportions. Elsa flees to the mountains, content to finally express her powers without fear, but wilfully optimistic Anna pursues her, sure that sisterly love can conquer all, and lift the icestorm that has frozen the kingdom. What follows is a struggle but not a classic Disney fight with an external evil.  Elsa needs to decide whether she wants to be a classic villain or whether she really does care.  While Anna needs to decide who she loves more - her sister, her fiance - the handsome Prince Hans, or the charming peasant Kristoff who has helped her up the mountain.

What follows is a movie of unsurpassed delight. Anna's aw-shucks goofy loveliness is grating right up until we realise what this movie is trying to say, at which point Kristen Bell's portrayal becomes utterly endearing.  Elsa is truly the most complex Disney character yet seen (not a high benchmark, I grant you) and her song "Let it go" is an empowering anthem with relevance beyond fairytale kingdoms. Idina Menzel gives a voice performance of nuance and strength and deserves an Oscar for Best Song.  Josh Gad (JOBS) is utterly adorable as the huggable snowman Olaf - the most charming animated sidekick since Donkey.  As for the men, well what a surprise to see that it's the male characters who are the least developed - and there's a cognitive dissonance when you realise that Prince Hans, whose face is clearly modelled on Paul Rudd, is in fact voiced by Santino Fontana, and that Kristoff, clearly modelled on Owen Wilson, is voiced by  Jonathan Groff. That's not to say that the actors do a bad job - it's just that the voice/face dissonance is so extreme that it was a bit distracting.

Still for all that, FROZEN had be captivated. The medieval folk architecture was beautiful - the stunning ice palace a marvel - the animation of racing through snow exhilerating.  Even better, the humour wasn't grounded in cheap pop-culture references (SHREK, I'm looking at you) but in real characters - those characters had emotional growth and development - and the surprises were genuinely shocking. I even loved the elegance with which small events and scenes were handled. The way in which it is delicately suggested that the King and Queen have died - when a black veil is hung over a portrait - is a great example here.

So kudos to all involved, but particularly to Jennifer Lee, who co-directed and wrote the movie.  She's the woman who wrote WRECK-IT RALPH - one of the best films of 2013 and is clearly a star to watch.  Particular mention also to Robert Lopez (co-creator of THE BOOK OF MORMON) and Kristen Anderson-Lopez who wrote the original songs for the film.  They're all strong, but "Fixer Upper" and "Let It Go" are instant classics.  I predict many, many awards, and rightfully so, this season.