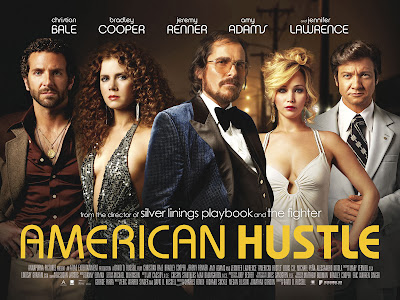 AMERICAN HUSTLE has swagger and style and enough hairspray to raise the Titanic. It has whizz bang energy and crazy characters high on their own con. There are times when it's outlandish hype slips into self-conscious kitsch - times when the performances are so balls-deep in crazy you wonder if the movie has just become BAD, but it's so fun, so bizarre, so outlandish you can't help but stick with it.

So what's the skinny?  AMERICAN HUSTLE is a very loose retelling of the Abscam scandal of the late 1970s - an FBI sting operation that spiralled out of control, eventually targeting US senators and congressmen with a fake Arab sheikh offering cash for a passport.  The whole thing was murky as hell.  I mean, the guys took the bribes, but this was entrapment and selection of targets as an artform.   In this version of the story, the original conmen are Irving Rosenfeld, played by Christian Bale, and his partner Sydney, played by Amy Adams. They're caught on a small time charge by FBI agent Richie DiMaso (Bradley Cooper), who gets so glamoured by their lifestyle that he decides to become part of the con, using them to entrap politicians.  Key among them is a New Jersey mayor, Carmine Polito - a mobbed up man, to be sure, but one who genuinely speaks from the heart when he says he wants to use the fake Sheikh's money to reinvigorate his home town.

Director David O Russell is far less concerned with the technicalities of the plot and the con than with the characters and their conscious and subconscious motivations. This is absolutely right.  And ironic.  In a movie so concerned with surface - the hairstyles, the clothes, the moves - there is no superficiality.  When a character extravagantly combs over his hair, or creates a tight perm, or wears a dress cut to the navel - they're becoming a character and the whole point of the movie is to watch them reimagine themselves as they'd like to be. So when the movie becomes a cheap melodrama, that's maybe because that's how these characters see themselves - as the stars of their own C-list caper movie.

Another delicious irony - the most honest man in the film is the original conman, Irving Rosenfeld.  And when I say honest, what I mean in the context of a film about self-delusion is that Irving is totally self-aware.  He knows he's a schlubby conman.  He knows he's going to be ensnared by his manipulative wife forever. And he knows he can stay safe by staying small, and not letting greed get the better of him. He's even self-aware about his weakness - his need to disguise his baldness.  This gives Irving a kind of wisdom and humanity that's lacking in the other, almost universally more narcissistic characters.  He's fully aware that Carmine Polito is a good man dirtying his hands to do good works, and is the only character who shows any kind of moral courage in warning him off.  There's a kind of brilliance in Bale's understated performance - the flash of knowledge that passes across his face as he acknowledges that DiMaso is out of control and makes the call to effectively switch sides.  And, yes, I see the added irony of calling Bale's performance subtle. But it is. Under the weight gain, and the combover, and the velvet wide-lapel suits, it's a great subtle performance.

By contrast, we have Brad Cooper in appropriately manic mode as Richie DiMaso, the henpecked mama's boy who sees the glamorous "Lady Edith" (Sydney's con character) as his ticket to reinvention as a kind of John Travolta in Saturday Night Fever, super-cool, super-macho, big-time PLAYA. He over-reaches in a way that Irving never would - to Lady Edith - to Senators - and his tragedy is that unlike Irving he really can't handle reality.

Irving's wife Rosalyn is as deluded as Richie but to gloriously comic effect. She's a young single mother so fortunate as to have Irving provide and adopt her son.  But in her mind, she's always in the right, always responsible for the good things, never responsible for the bad, and a star in her own universe.  Jennifer Lawrence is so unbelievably hilarious and captivating in her few scenes that she threatens to unbalance the movie just as she unhinges the con, and if her Oscar nomination last year was generous, this year it will be thoroughly deserved.

Sadly, Lawrence's incadescent Rosalyn put Amy Adams "Lady Edith" in the shade.  Adams, cast against time as the vamp, just can't carry off the super sexy outfits and in the inevitable final act confrontation between Irving's lover and his wife, it's Rosalyn/Lawrence who comes out triumphantly on top.  In fact, they seem to be in different films - and maybe that's the point.  Adams/Edith is playing in a romantic tragedy whereas Lawrence/Rosalyn is in a lurid supersexy melodrama. Adams has the  emotional crisis, but Lawrence has all the fun.

All the way through watching AMERICAN HUSTLE I felt like I was right on the edge where so bad it's good becomes just bad.  But the more I think about it, the more I think that's the point. These characters are all, more or less, actors, hustlers, putting a con on themselves and us. Some do it better than others.  And David O Russell has made a movie that isn't so much his take on the Abscam scandal, as a patchwork of all these hustlers own perceptions of their con.   Maybe I'm being generous. And if I'm wrong, there are times when the performances and the direction in this film are so broad and pastichey and kitschy they are bad.  But if I'm right, then this is a film working on a meta levels of brilliance while all the time being entertaining in the most basic of ways.

AMERICAN HUSTLE has a running time of 138 minutes and is rated R in the USA and 12A in the UK.