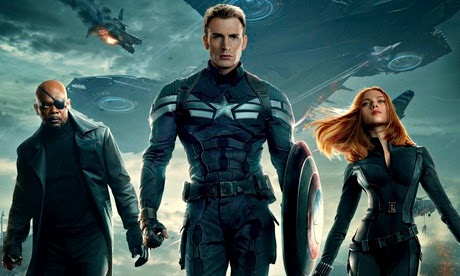 CAPTAIN AMERICA: THE WINTER SOLDIER is an utterly satisfying comic-book summer blockbuster but I wonder how certain members of the audience will view its earnest liberal political agenda.  Which is to say that I agree with absolutely everything this movie says about the trade-off between freedom and security, but even I found the messaging rather heavy-handed. So much so that this movie could've been sponsored by Wikileaks or the Edward Snowden defence fund.  That said, it's the most politically engaged, elegantly written Marvel movie, so I'm really not complaining.

As the movie opens we see the formerly cryogenically frozen super soldier Captain America unfrozen and working for SHIELD  As well as catching up on fifty years worth of pop culture, he's also struggling to reconcile his earnest no-nonsense good guy values with his current job enacting secret missions in a world without clear-cut enemies. His boss, Nick Fury, isn't helping by being all paranoid and on the verge of launching three super-fighters capable of taking out terrorist threats before they happen, with the co-operation of World Security Council chief Alexander Pierce.  But soon Fury is the subject of an assassination attempt, Captain America himself is under attack, and Hydra is rearing its many-heads once again.  His only allies are the newly contemplative Natasha Romanoff aka The Black Widow and the similarly earnest Sam Wilson aka The Falcon.

There's a lot to love here without the politics. The dialogue is smart, if not as constantly wise-cracking as an IRON MAN movie.  I love the genuine chemistry between Chris Evans' Steve Rogers and Scarlett Johansson's Natasha.  I love the elegant way in which the scriptwriters (Christopher Markus and Stephen McFeely) give us the prequel backstory by way of a museum exhibit.   The plot has a pleasing complexity without seeming wilfully obscure, and it allows minor characters a chance to shine - not least Sebastian Stan in what could've been a thankless cameo role as The Winter Soldier but drips with melancholy.  I even love the behind the scenes stuff - particularly the subtle ageing make-up on Hayley Atwell's Peggy Carter, the gorgeous hand to hand combat choreography, and the cinematography from Trent Opaloch (DISTRICT 9) that's less than the motion sickness of Bourne but still engrossing enough to keep us on the edge of our seats. So kudos to the unlikely directors, the Russo brothers, for pulling it all together.

But this movie ultimately stands or falls on how you feel about its politics because, believe you me, this kind of earnest engagement with a highly contemporary issue is bold and brave, not least because of its ramifications for SHIELD within the real-life complex commercial universe that Marvel has established.  I love that beyond all the fighting this is ultimately a thoughtful, provocative and bold film - one that, like Captain America himself, has the courage of its convictions and a kind of audacity that is rare in a summer blockbuster.  That audacity caps itself off in the anti-casting of arch-liberal Robert Redford as a hawk, and the wonderfully subversive final scene involving Jenny Agutter.  We've come a long way from THE RAILWAY CHILDREN!

CAPTAIN AMERICA was a great summer blockbuster.  Its sequel is something more than that.  A great entertaining movie but one that also has the courage to pose serious questions about our world and doesn't patronise the audience with easy answers.

CAPTAIN AMERICA: THE WINTER SOLIDER has a running time of 136 minutes and is rated PG-13 in the USA and 12A in the UK for infrequent moderate violence.

CAPTAIN AMERICA: THE WINTER SOLDIER is released this week in the USA, France, the UK, Belgium, Ireland, Italy, South Korea, Norway, the Philippines, Poland, Sweden, Argentina, Germany, Denmark, the Netherlands, Portugal, Singapore and Spain. It is released on April 3rd in the UAE, Australia, Greece, Hong Kong, Macedonia, New Zealand, Russia and Thailand; on April 4th in Bulgaria, Canada, China, Estonia, India, Iceland, Lithuania, Mexico, Peru, Romania, the USA (wide release) and Vietnam; on April 9th in Serbia; on April 10th in Brazil, Hungary and Cambodia; on April 11th in Turkey; on April 19th in Japan.
Posted by Bina007 at 17:52