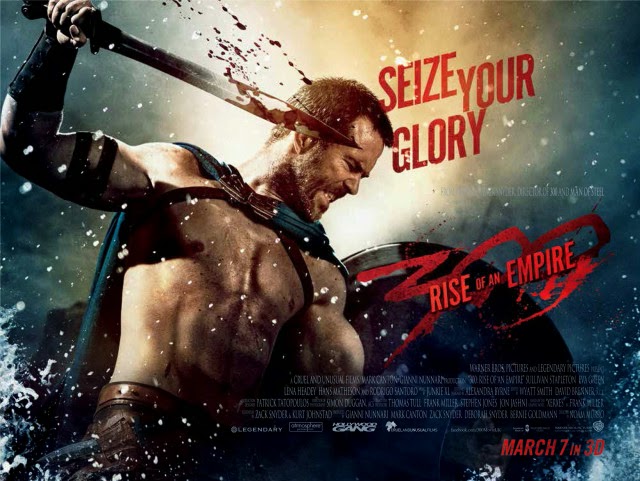 300: RISE OF AN EMPIRE is a highly enjoyable trashy ancient history action romp with a far better technical and historical pedigree than one might, at first, believe.  Rather than a straightforward sequel, the story of this film envelopes and gives context to the narrower, purer story of the original film. In that movie, we see King Leonidas of Sparta lead his personal bodyguard of 300 men to the hot gates, only to be betrayed by a hunchback to their deaths at the hands of the Persians. As this  movie opens we see Spartan Queen Gorga (Lena Headey) sailing with her men into battle, and recounting the back story of those events.  She takes us back to the Battle of Marathon when the Athenian general Themistocles (Sullivan Stapleton - ANIMAL KINGDOM) - killed Darius I, inspiring the anger of his son Xerxes that manifested itself in the current Persian wars.  Gorga tells us of how her husband was killed (the events of the first movie) and the bulk of the action sees the simultaneous sea battles with Themistocles pitted against Xerxes' navy - commanded by his female commander Artemesia (the always brilliantly bonkers Eva Green.)  There's a lot of awesome tactical stuff, some ludicrously gory battles, and a stupidly over the top sex scene between the two opposing commanders. (Because - well - just because).  And then finally we get the Battle of Salamis, where after the death of Leonidas, Sparta finally joins its ships to the Greek alliance.  (If you think that's a spoiler, it's bloody 2500 year old history!)

There's a lot to like here.  The battles and tactics are all mostly accurate and the aerial shots mean that even in the midst of all the OTT video-game style violence you still have a clear idea of what's going on.  The acting isn't bad - certainly not as bad as Gerard Butler's Scots inflected "THIS IS SPARTAAAA!" and the style is exactly the hyper-stylised Zack Snyder style of the original, albeit directed by Noam Munro (SMART PEOPLE).  I really loved the way the movie was written, with a lot of back story handled deftly and the nice enveloping of the original movie. All in all, it just felt like an awesome live action version of Total War.

As to the actual history,  the basic outline of the story is true.  There really was a war that united the Greek city states against the Persian empire, and Themistocles really was the leading Athenian politician who commanded the navy, although that post technically went to a Spartan called Eurybides who doesn't appear in the movie.  The Spartans really didn't believe in democracy but united against a common enemy, although in fact they only supplied 16 ships against the Athenians' 180.  The battle tactics we see are mostly true - particularly the awesome battle where the Greeks lure the Persians into a narrow inlet where the size of their fleet works against them.  It is, sadly, unlikely that Queen Gorgo led the Spartans into battle, but Artemesia really was the leading Persian naval commander, and highly influential on Xerxes. She was a skilled tactician, foresaw that Xerxes should have invaded Greece by land rather than sea, but didn't die in battle. Nor was she a gang-raped slave. Rather she was Queen Regent of a Persian client state.

Which neatly brings us to the issue of alleged misogyny. On that subject it has to be admitted that we only have to wait a few minutes before we get a gratuitous boob shot, but set against that so much of 300 is about the objectification of male bodies - so much so that one might declare this a camp classic.  Admittedly, the decision to make Artemesia a sexual slave in order to motivate her vengeance is questionable, as is the fetishisation of her blood lust.  On the other hand, in the pivotal sex scene with Themistocles, when he attempts to take her from behind she turns the tables on him.  Still, I guess there is a problem with the fact that she ultimately dies (all strong women must be punished) - then again, Queen Gorga leads her troops into battle.  So, overall, 300: RISE OF AN EMPIRE has far more slippery politics than one might expect, and it's also the case that we have a sword-swinging action movie where the two most recognizable stars - both of whom go into battle - are women!

In other words, this may well be the first movie franchise that has gone so far round the circle of misogyny that it's actually come back out as proto-feminist.  But maybe I'm just over thinking it!

300: RISE OF AN EMPIRE went on global release on the weekend of March 7th. It has a running time of 102 minutes and is rated R in the USA and 15 in the UK for strong bloody violence, strong sex and sexual violence.
Posted by Bina007 at 19:15