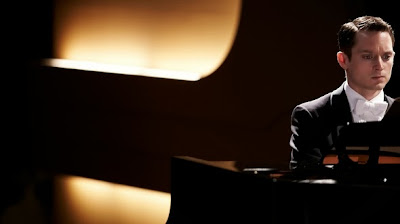 One of the films getting the most buzz at this year's London Film Festival is Damien Chazelle's music lesson slash thriller WHIPLASH starring J K Simmons.  And as luck would have it, the movie he penned, GRAND PIANO, is on release this week in the UK.  The similarities are striking - a thriller set in the world of classical music.  And while I didn't manage to watch it at last year's LFF, I did catch it today on its theatrical release.

GRAND PIANO stars Elijah Wood as a concert pianist on the eve of giving his comeback concert after some kind of breakdown. He's evidently riven with stage fright  and early on has a deep and meaningful conversation with a fellow musician about the relative merits of giving a passionate authentic performance or just technically playing the exact right notes. (Of course, this skirts the fact that you can do both - it doesn't have to be Lang Lang vs Leslie Howard - it can be Brendel.)


Anyways, as the thriller unfolds we can an increasingly paranoic soundscape - phone conversations we can't quite hear the other side of, instruments tuning up cluttering the pianist's attempt at calm - and finally the concert itself.  The conceit of the film is that in the midst of the recital the pianist finds himself in the site of a sniper threatening to kill him should he play one wrong note.  Think of it as SPEED for the Wigmore Hall set, filtered through the lens of giallo.  There has to be a certain BLACK SWAN suspicion that the musician is just imagining his greatest fears as vocalised by John Cusack. But pretty soon it becomes clear that the threat is real, even if the prospect of a pianist seemingly talking to himself on stage, running off and back on, doing a tour de force encore and then asking his wife to sing some kind of soupy popular ballad isn't.

In fact, I think I can pinpoint the exact moment when GRAND PIANO jumped the shark and it involves some hammy over-acting by Downton Abbey's Allan Leech and Tamsin Egerton.  Does this kill the film? I think it depends on whether you're willing to go down the rabbit hole of Giallo homage with the director. If you're a fan of split screen shots, spooky mirror reflections, hugely melodramatic close-ups and general gonzo mayhem, then this movie is actually rather brilliant. Even the fake classical music references Rach, Tchaik and other famous concerti.  This is then, essentially, a movie for lovers of a certain kind of schlocky 80s thriller and taken in those terms its technically accomplished but cheesy fun. However, I pity the poor fool who walks in unprepared, expecting something more mainstream and credible.

GRAND PIANO has a running time of 90 minutes.