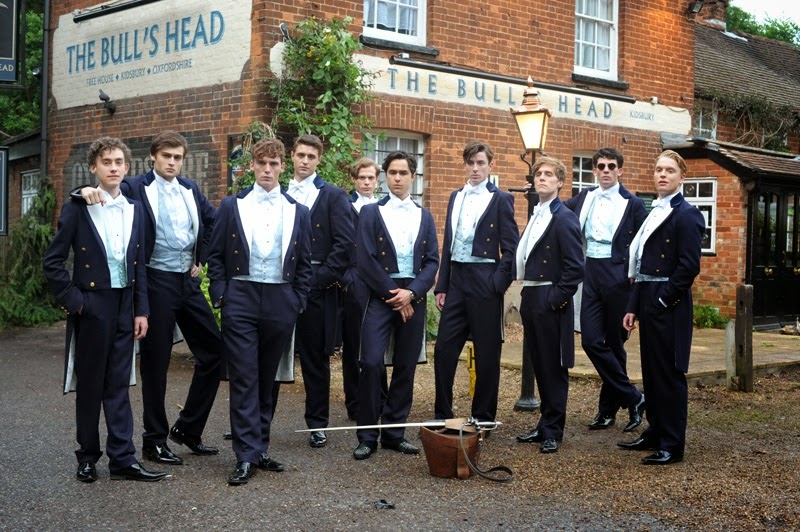 THE RIOT CLUB is a profoundly political film that has about as much subtlety as the title of the play upon which it was based, Laura Wade's POSH.  Both play and film seek to show us the casual cruelty, entitlement and vacuity of Britain's ruling elite and the vulnerability but ultimate incorruptibility of the working classes who happen to cross their path.  The lens through which Wade attempts to tell her rather simplistic tale is that of an Oxford dining society, here called The Riot Club, but clearly based on the Bullingdon Club - perhaps the most elite of Oxford's many dining societies, boasting the current Prime Minister (and I suspect the film's producer - heir to the de Walden estate) as one of its members.  In Wade's eyes these clubs are bastions of private-school educated male privilege, where spoiled rich kids get drunk, abuse the locals, and show their general contempt for anyone who isn't in their tribe. Most particularly, she asserts that the system is self-protecting - that their grossness will be paid off, bought off, leaving them to emerge into glittering careers unscathed by any "naughtiness".


There is much to admire in this film.  The use of Oxford and Winchester as locations lends authenticity - the detailed observation of entitlement  - the assumption that everyone can be bought - is exactly right. As is the fact that all dining societies do have stupid foundation myths, odd toasting rituals and a penchant for singing the national anthem.  But so much else is wrong. Maybe deliberately so? Maybe this is artistic license - making everything grander to illustrate a point.  But if Wade et al really are out to indict the current system maybe sticking to facts rather than melodrama might have lent them more credence.  Oxford tutorials don't descend into crude slanging matches. And no matter which school you went to, you don't get into Oxford with the kind of half-baked fascistic hatred that animates the anti-hero Alistair Ryle (a superb Sam Claflin) - or at least you know better than to voice such thoughts in front of your professor. Oh, and even the most landed of aristos, doesn't show up to college with a brace of pheasants slung over his shoulder.

I guess the wider point is that dining societies today aren't like the Buller or GavSoc or Vinnies in the 1970s.  Social media makes getting up to mischief far harder and anyway, Oxford is basically full of a bunch of geeks - there's a limit to how licentious is gets!  Moreover, the kind of mob incitement leading to violence is hardly the preserve of the upper classes.  Yes the upper classes are entitled.  Yes Oxford is an elite. But it's an open elite. Wade is criticising a concept that no longer exists.  And indeed, her film may be self-defeating.  Full disclosure - I studied at Oxford, and was both member and President of various dining societies - some august, others less so. More to the point, in my final year I did undergraduate admissions for PPE at my college. It was so hard to get state school kids to apply as they'd all read Brideshead and had an anachronistic view of what they thought would be a very narrow social environment at college.  I predict two things if this well-made film is a hit: first, a bunch of wags will set up a real Riot Club and be obnoxious in its name just as Wall Street was a recruiting card for the banks it sought to condemn;  second, there will be some state school kids who will not apply to Oxford because they think the Riot Club is what defines its social life.

Of course, film has no responsibility but to be truthful to itself as art. But such a result would be sad and ironic.

Still, I recognise that I am reviewing the politics of the film rather than the film itself.  And that's unfair.  So here's a review of the film.  Max Irons (Edward IV in The White Queen) stars as a well-meaning earnest but privileged boy called Miles who arrives at Oxford and starts dating a working class Northerner (Holliday Grainger) called Lauren.  The antihero of the piece is Miles' tute partner Alistair, who has no qualms about defending his right to enjoy the benefits of privilege, and indeed in today's politically correct world, actually feels victimised when asked to apologise for his wealth. Both boys are recruited into an elite dining society filled with "Tim Nice But Dim" types who are basically all spoiled, feckless and self-involved.  The dinner starts off rather pathetically - drunken, childish and brattish - but soon descends into cruelty and violence as Alistair goads the boys into a tribal assault on the working class men and women who refuse to be bought off.  This leads to a rather cat and mouse second half of the film wherein each potential victim is bought before the club and the audience feels the tension mount as to whether they are going to be THE person who turns the film on its head and leads to chaos.

The production values and shooting style are superb with Lone Scherfig (AN EDUCATION) once again proving an astute observer of English social mores.  The performances vary in standard.  At the less impressive end of the scale, Natalie Dormer of GAME OF THRONES fame does a repeat performance as feisty in control woman in a man's world and Jack Farthing basically reprises his role as the dim son in the TV series BLANDINGS.  Douglas Booth et al are largely pretty and vacant which is maybe the point. Moving up the scale, Max Irons shows the callow impotence of the liberal man swallowed by the group - perfectly cast.  But it's Sam Claflin who steals the show as Alistair Ryle, the brute fascist, who is utterly mesmerising and enigmatic as the antihero. As for the writing, the politics may be unsubtle and  the target rather anachronistic but the issues raised are still vital and the debate still needs to be provoked.

THE RIOT CLUB has a running time of 107 minutes and is rated 15.  The film is on release in the UK and Ireland.  It  goes on release in Italy on September 25th, in the Netherlands on October 2nd, in Austria, Germany and Portugal on October 9th, in Denmark on December 4th and in France on December 31st.
Posted by Bina007 at 18:20