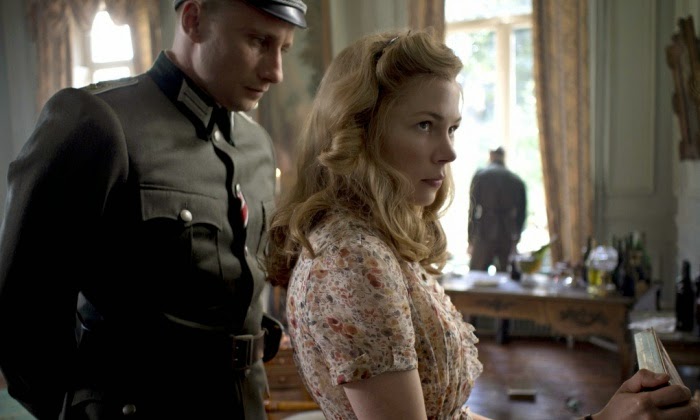 The movie stars Michelle Williams as Lucille Angellier cowering under the iron rule of her mother-in-law (Kristin Scott Thomas).  Matthias Schoenaerts plays Lieut. Bruno von Falk who is billeted with them.  They fall in love over their shared love of music while the town goes to hell under wartime occupation.

The genre of film that features wartime wives falling in love with billeted officers is a well-trodden one and I'm not sure this film adds anything to it.  The fact that it's music that shows the woman that the man has a soul is, after all, the conceit of CAPTAIN CORELLI'S MANDOLIN.  Which isn't to say that this part of the film is badly done - it's just nothing knew.   What's far more fascinating is the depiction of the class-riven, gossipy French town and the nuance with which each character is drawn.  None of them are entirely nice or entirely nasty, and that also applies to the hero and heroine.  Characters who we find ignoble at first, find a certain dignity and courage by the end. Those that we feel are heroic allow mean things to happen.  And even the milksop heroine grows a pair by the end.

The resulting film may therefore satisfy no-one.  Those looking for a dreamily-lit, schmaltzily-scored romantic drama will find the characters rather ambiguous and hard to root for.  Those of us who like our dramas dark and spiky will rejoice at the ambiguity but find ourselves fidgeting during the romantic set-pieces.  But, still, overall, I feel there is enough to admire in the performances of Kristin Scott-Thomas, Harriet Walter and Lambert Wilson in particular to make this film worth your while.

SUITE FRANCAISE has a running time of 107 minutes.  The film is on release in the UK, Ireland and Italy. It opens next weekend in Belgium & Switzerland. It opens on March 26th in the Netherlands, April 1st in France, April 2nd in Portugal, May 15th in Turkey, May 21st in Denmark and May 22nd in Spain.
Posted by Bina007 at 16:57