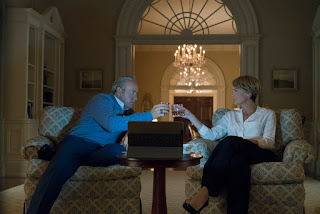 In private, Vice President Claire Underwood (Robin Wright) is angry with Frank for not sharing his gameplan.  He tells her that his resignation was not a last minute decision but part of a long-run plan since Elysian Fields. He has realised that the real power is not in the White House but in the powerful forces who control it. Therefore the most powerful combination is for Frank to control the private sector influence on the WH and for Claire to be running it. She resents him telling her that he made her the President and tells her she has to pardon him for all his crimes once she's President.  She says she could be impeached for it.  Frank also reveals that he was the leak all along via his Chief of Staff Doug Stamper (Michael Kelly). She tells him to shut down the surveillance and that she killed her ex-lover Tom Yates.  He tells her he'll do that as soon as she pardons him and that she'll have to pardon Doug too at a later date.

Claire then tells Special Adviser Mark Usher (Campbell Scott) about the death of Tom Yates in his house.

Journalist Tom Hammserschmidt (Boris McGiver)  visits Doug who says he's resigning. He pleads the fifth on whether he killed Zoe Barnes. He denies that Frank killed her. He also denies being the leaker.  Doug looks confused - and perhaps thinks Frank might have sent them.  Claire then asks Seth to resign - just temporarily - because she needs to distance herself from Frank's team. She promises to bring him back like Leann.   Doug then hands in his resignation to Frank and Frank offers him a memento of the WH and says that they can't see each other for a while.  Doug looks devastated but later takes the rap both with the Feds and with Tom Hammerschmidt.

Frank then Claire about her prevarication over pardoning him. He threatens not to resign.  She acquiesces to the pardon but says it won't be immediate. He then resigns.  Claire is sworn in as president.  Frank wonders if he loves power more than her. He urges her to declare war in her inaugural address.  She asks him to leave the White House.  They need to appear to be estranged for the pardon to work.  Frank urges Mark to share Claire's cabinet picks with him but Mark is cagey.  Later, Jane refuses Claire's offer to be part of her cabinet as she prefers to operate within the middle east.  Mark then tells a shocked Leann that she will not be Chief of Staff. Jane then calls Frank and they agree that Leann has served her purpose.  Frank tells Claire not to trust whoever Mark suggest as her Vice President.  Usher actually suggest himself.

Jane gives Leann her bloody gun back. She then visits Claire and urges her to declare war.  Jane also reiterates that the migraine medicine she gave her is lethal in higher doses. Leann asks to see Doug but is assassinated on Frank's orders before she can get to him.

In Claire's inaugural speech she announces the assassination of the terrorist Ahmadi, and declares war on the terrorist organisation disrupting Syria.  Claire does not pardon Frank and he says that he will kill her.  As the series ends, Doug tries to call Leann, and a white house staffer tries to call Tom Yates - both are of course dead, as is a protester who tries to scale the White House gates and is shot down.  Claire can't go for a run because of the threat level. She appears to find a bug in the Oval Office and declines Frank's call. She turns to the audience and says "my turn".

COMMENTS: It makes utterly no sense that Frank was in control all along and leaking against himself.  It's absurdly convenient that Frank has had a piece of blackmail evidence on Romero all along. It was also obvious that she wouldn't pardon him and therefore that he should never had brought about this plan.
Posted by Bina007 at 08:13