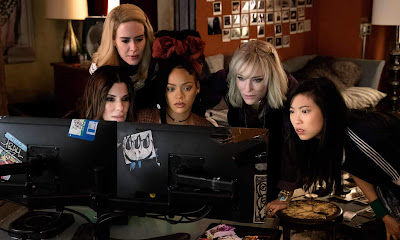 The OCEAN'S films - when they work - work because they show us a group of people who are all friends in real life, having a really good time getting up to no good.  The original Rat Pack oozed cool and elegance - they created an exclusive guy's club but had the generosity to let us inside for 90 minutes. The cast of the Stephen Soderbergh remake may not have all been best friends in real life, but the relationship between Brad Pitt and George Clooney was real enough, and they all did genuinely look like they were having a blast. Moreover, they were lucky enough to be filmed by Soderbergh with a deliciously luxe, cool, 70s infused kinetic energy, and to have a soundtrack of Dave Grusin-y goodness.

The problem with this new all-girl remake is that it fails to deliver that spark, that fun, that attractive glamour.  I didn't believe these girls were actually friends or had any kind of relationship.  The movie had no tension. It had only one genuine laugh. And at its centre - the message was rather cold.

Let's break it down. The movie opens with Sandra Bullock playing the late Danny Ocean's sister Debbie. As in the Clooney version, she gets out of jail with a plan for a heist and assembles the gang to pull it off together with her best friend and sidekick Lou (Cate Blanchett in biker chic mode).  There are some surprisingly big names in the ensemble cast and then a smattering of younger musicians in there - Rihanna, Awkwafina - presumably to attract a younger more diverse audience. So much of this film feels made on a spreadsheet by the finance department calculating to maximise revenue. The con is that the girls will get a fashion designer (Helena Bonham Carter playing herself with an Irish accent) to insist that a Hollywood star (Anne Hathaway satirising herself) wears a $150m Cartier necklace to the Met Gala.  From there, the girls will make the actress eat a dodgy bowl of soup, throw up it the bathroom, and have the necklace switched with a 3-D printed fake.  Their jewellery expert (Mindy Kaling) will break up the necklace and the girls will wear different parts of it out.

All of this sounds promising enough as a basic heist story. The problem is that the girls have no fun together.  Only Anne Hathaway really has any fun with it.  The script contains no tension or wit - and why you'd give such a major project to a first time screenwriter - Olivia Milch - is beyond me. I don't care if she's the producer, she's out of her depth, and the soggy, mediocre script sinks the movie. Then you later on pedestrian direction from Gary Ross (THE HUNGER GAMES) and a really mediocre repetitive score from Daniel Pemberton (ALL THE MONEY IN THE WORLD). The result is a film that can't really be truly bad given the talented cast, but one that simply fails to ignite. The final nail in the coffin is that this film has no heart. In the first movie we forgive Danny his criminality because he's charismatic and fun, but most of all because he wants to win back his girl.  In this film, his avatar is setting up a treacherous ex (Richard Armitage). This lends a subtly petty and nasty undertone rather than a loving glow.