THE EYES OF ORSON WELLES 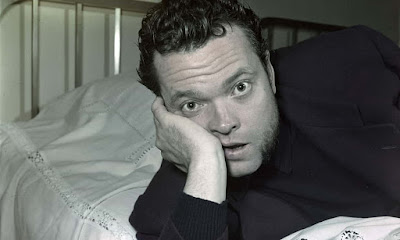 THE EYES OF ORSON WELLES is a deeply frustrating film. On the one hand, it's a must-see for any connoisseur of Welles' work, showing us line drawings, pastels, paintings that Welles made throughout his life - never before seen sketches of faces, Christmas cards, lovers notes. Never intended to be seen by a wide audience, the thesis of director Mark Cousins (STOCKHOLM MY LOVE, I AM BELFAST) is that these pictures can tell us about how Welles saw the world - his preoccupations, his literal points of view, and illuminate our understanding of his films. The most useful thing that Cousins does is curate those drawings and juxtapose them with the settings in which they made - Morocco to New England and everything in between.

The problem with the film is that we are never left to contemplate the images for ourselves. Instead, we have the incessant, lilting voice of Cousins with his - to be generous whimsical - to be harsh - indulged and narcissistic voiceover - interpreting them for us. Personally, I found his voice intrusive and his imagining of some kind of personal relationship wince-inducingly embarrassing.   I mean, who on earth is Mark Cousins to be addressing Welles in some fictive first person interrogation, explaining to him what a mobile phone is.

I came to the conclusion that what I wanted was not this film but a coffee table book, handsomely produced, of a curated selection of Welles' art as shown in this film, with a few concise captions for context.  Luckily, those of you close to Edinburgh can approximate just that by visiting an exhibition of his work at the Summerhall Festival. Or you can watch this film on mute so it doesn't become THE VOICE OF MARK COUSINS.

THE EYES OF ORSON WELLES has a running time of 115 minutes.  The film played Cannes 2018 where it won the Golden Eye - Special Mention.  It is currently on release in the UK and USA - in cinemas and on streaming services.
Posted by Bina007 at 14:32