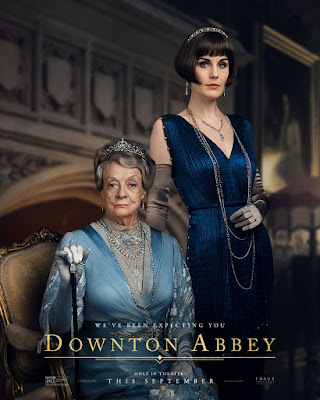 DOWNTON ABBEY the movie is exactly what DOWNTON ABBEY the TV show is but glossier and longer - it's sort of akin to a super version of their Christmas specials. I doubt anyone who isn't a fan of the show would watch the film - indeed no concessions are made to those who don't know the backstory of the aristocratic Crawley family. We simply dive in, in media res, with the family preparing for a Royal visit. Some characters are absent - notably Bates, and for much of the film, Mr Talbot.  Some characters are present with essentially nothing to do - notably Lord and Lady Grantham.  The action centres on Mary Talbot (as usual) - wondering whether to keep the show that is grand country living on the road - and Lady Edith missing her old career - in both cases of course we are meant to sympathise with the grand people with their obligations, and look to the loyal servants to sympathise with them, enable them, and provide moral support.  Of the visitors, the action centres of Imelda Staunton as Lady Bagshawe, and a backstairs secret she is holding that also involves Jack Leech's Branson - after all with the Downton family married of, he's the only candidate left for romance!

The resulting film is everything one expects from Downton, fully satisfying to fans of the series, and probably irritating to those who aren't. It is essentially conservative in its views of the value of the aristocracy and a rural way of life, but mildly progressive in its B plot - sympathy for closeted homosexuals; working women who have to give up their careers to be decorative arm-candy.   It looks sumptuous, with lavish costumes and ball room scenes.  And while the plot and dialogue are rather mechanical, one does of course have the joy of Maggie Smith as the dowager Duchess, with her witty one-liners, not to mention a rather emotional and lovely denouement.

DOWNTON ABBEY is rated PG and has a running time of 122 minutes. It was released earlier this year and is now available to rent and own.
Posted by Bina007 at 12:19