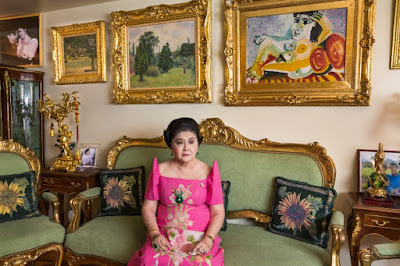 Documentarian Lauren Greenfield (THE QUEEN OF VERSAILLES) has done it again - with another superbly crafted, beautifully observed documentary, that speaks exactly to our times. She has won astounding access to Imelda Marcos, former first lady and self-appointed "mother" of the Philippines - an Eva Peron style dictator's wife, who looted her country, amassed a collection of designer clothes, shoes, priceless works of art and buildings in Manhattan - and colluded in her husband's violent, corrupt martial dictatorship. We meet the former beauty queen in her mid-80s, still obsessed with her looks, but more importantly, still obsessed with "clout".  The reasons become clear - by controlling the current government she can ensure that those forces of progressive activism and anti-corruption are called off, and that her wealth will remain within the family. And of course, she has the money to do this - "generously" handing out banknotes to the shanty-town dwellers she robbed decades ago, and more ominously, bank-rolling the career of her own son, and apparently putting the nasty strongman Duterte into power as the current President of the country.

This is a powerful story on its own terms.  We see the evil of the Marcos regime beyond the jokes about a shoe collection. What is fascinating is where the line is drawn between delusion and outright lies.  She seems to believe she brought an end to the Cold War with her international diplomacy to dictators everywhere. Her hilarious old American friends suggest her husband was just getting her out of the country so he could bang chicks.  But on the assassination of their political rival, Ninoy Aquino, surely she is outright lying.   And what of her children and grandchildren? Surely they must know the real power project is to protect ill-gotten gains?

What I really respect about this documentary is that the platform given to the Marcos is balanced with the voices of those they oppressed. We hear powerful and moving testimony for journalists and activists tortured and in some cases raped. We hear from the judicial officer charged with repatriating their stolen wealth, who is then targeted by them with corruption charges. Most powerfully, we hear from Aquino's son - himself later a President.

But perhaps the most frightening and resonant part of this documentary is how it speaks to why ordinary poor Filippinos welcome the Marcoses return to power. There are so many ways in which it reflects on the rise of populists around the world - the  attraction of short punchy slogans, the belief that only a "strong man can sort out structural problems, the use of social media to spread fake news and rewrite history. Imelda says that "perception is the truth". She's not wrong, and it's petrifying.

THE KINGMAKER has a running time of 100 minutes. It played Venice, Toronto and London 2019. It opened in the USA last month and is currently on release in the UK.
Posted by Bina007 at 11:24