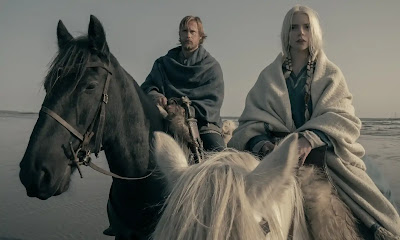 THE NORTHMAN is a really bad, stupid movie made by a director - Robert Eggers - who has really blown it.

It stars Alexander Skarsgard (BIG LITTLE LIES) as a super buff version of Shakespeare's Hamlet. We first meet him as a young prince, whose father (Ethan Hawke - BEFORE SUNRISE) is offed by his treacherous uncle, leaving our young Amleth to run for his life.  We then meet him as a buff young man, raised as a berserker warrior then Russian slave, intent on revenge, as foretold by equally nuts prophetess Bjork and as enabled by his witchy lover (THE QUEEN'S GAMBIT's Anya Taylor-Joy).  So he goes and kills his uncle and his mum - who it turns out rather resented the offspring of rape - and founds his own dynasty. The End.

What makes this unwatchable - apart from the really dumb plot full of dump people motivated by greed and expressing themselves in a mix of violence and drugged out lunacy - is the fact that all the acting is BAD. Pantomime bad. Bad with a side order of the worst fake accents since Dick van Dyke in MARY POPPINS.  What is this half Scottish half Irish half whatever nonsense they are all speaking? It's utterly distracting, totally unconvincing, and takes you out of the story at every turn.

These are all unspeakable people with unlistenable accents and no amount of self-conscious sweepingly majestic cinematography makes up for that.

THE NORTHMAN has a running time of 137 minutes and is rated R. The film is available to rent on streaming services.