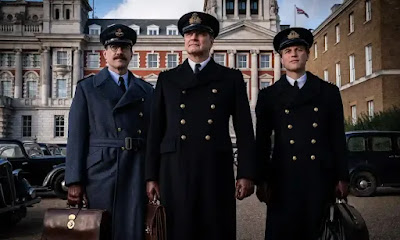 In 1943 the Allies were desperate to land troops in mainland Europe and open up a second front against the Axis powers, and the most obvious candidate was an amphibious landing in Sicily. The problem is that this was equally obvious to the enemy.  So, British counter-intelligence cooked up a cockamamie scheme to convince Hitler that the invasion would actually take place in Greece. The schemers did this by taking a dead Welsh man and floating him into harbour in Spain, disguised as a drowned Royal Marine Officer complete with locked attache case containing the fake plans. Why Spain? Because it was a technically neutral country filled with agents, double agents and triple agents, where the British felt they could map out the path of the fake intel all the way from Spanish fisherman to Hitler himself.  This operation was dubbed Mincemeat, and in Ben Macintyre's wildly popular non-fiction account of the ruse, he argued that it was the most successful intelligence operation in history. Who can tell? We can for sure say that by allowing the Allies to land on a less well defended beach, Mincemeat saved Allied lives.

This new film adaptation of the story is compelling when it sticks to the espionage plot.  John Madden (SHAKESPEARE IN LOVE) does a good job of telling a complicated story and while it does rather drip with British heritage derring do, it's not as jingoistic as it might have been.  Madden and screenwriter Michelle Ashford manage to add shades of nuance with the casting of Mark Gatiss as the potentially treasonous brother of the naval officer in charge of the deception (played by Colin Firth).  I wish they had explored this subplot further. Rather, they waste their time adding a fictional romantic triangle between Montagu - his nerdy colleague Cholmondely (Matthew MacFadyen - SUCCESSION) and their subordinate Jean Leslie (Kelly Macdonald - BOARDWALK EMPIRE).  I felt this love story was rather tacked on and artificial and simply distracted from the real meat of the story.  It was actually far more interesting to see what was happening in neutral but spy-ridden Spain and I was pleasantly surprised to see the rather frank depiction of how the British attache (Nicholas Rowe) was pleasuring his former handler into taking the bait.

In the supporting cast I thought Jason Isaacs rather wasted in the role of the British military commander unimpressed by the Mincemeat plan. By contrast Johnny Flynn (EMMA) was having great fun as a young pre-James Bond Ian Fleming. But Penelope Wilton (DOWNTON ABBEY) was the real moral heart of the film as the secretary of the espionage unit.  The sight of her, on the eve of the Sicily landing, praying fervently in the office that the Germans had taken the bait, was genuinely moving and brought home the true stakes of the deception.

OPERATION MINCEMAT has a running time of 128 minutes and is rated PG-13. It is now on release in cinemas and on streaming services.