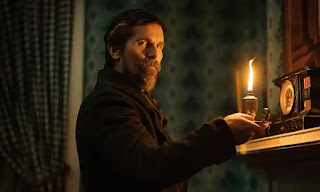 Scott Cooper (CRAZY HEART, HOSTILES) returns to our screens with a gothic crime story starring Christian Bale as a jaded, grief-stricken detective called in to solve a gruesome murder at West Point in the 1830s. He is assisted by the young Edgar Alan Poe who really did attend West Point briefly.  Harry Melling gives the stand out performance of the film as the strange, mournful but intelligent young writer. The murder involves some strange, apparently ritualistic mutilations that allow for spooky slash Dickensian cameos from Robert Duvall and Gillian Anderson respectively. In fact the latter made me think of her turn in the wonderful BBC adaptation of Bleak House as this film matches a lot of that show's colour palette and elegiac tone.

The problem with the film is that it lacks any real drive or propulsive impact either as a detective puzzle or as a horror story. I think it maybe wants to be an emotional investigation of grief instead? Even that didn't really work for me. It just felt dull and overlong. The only reason to watch it is for Masanobu Takayanagi's (HOSTILES) stunningly wintry colour-drained photography.

THE PALE BLUE EYE is rated R, has a running time of 127 minutes and is streaming on Netflix.