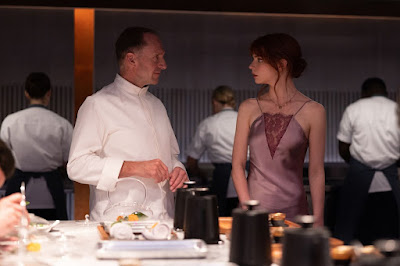 My cousin announced she was getting married in Lisbon and as my husband and I hadn't been to Portugal for decades we thought we would make an extended holiday out of it, planning a road trip by picking every single Michelin one and two star restaurant along the way for dinner every night bar the wedding, starting in Faro and ending in Porto.  We are the greedy capitalist bastards, where the dishes become a blur, that have apparently sucked the joy out of cooking and life for celebrity chefs like the fictional Julian Slowik (Ralph Fiennes).

As a result, he lures a privileged few diners to his remote island restaurant for an epic tasting menu that will fully express his nihilism and totalitarian control of both staff and diners.  If you have the audacity to ask for mere bread, his maitre d, Elsa (Hong Shau) simply says "no".  Every course is exquisitely described and reveals yet more about the contempt in which the diners are held. And so we come to the inevitable horror-comedy conclusion.

For me, this is a superb social satire cum black comedy that takes the piss out of people like me. It comes as no surprise that it was written by two late night comedy writers - Will Tracy (Last Week Tonight With John Oliver) and Seth Reiss (Late Night With Seth Myers). There is a spareness to the comedy that is devastating. And the over-fussiness of the menu seems absolutely spot on.  Mark Mylod (Succession) directs with a cool deadpan tone and kudos to all involved in the production design.  The performances are uniformly good BUT Hong Chau is the stand-out in expressing the cult-like status of these chefs and the rigidity of their approach to actually enjoying food. It's kind of nuts to me that Anya Taylor-Joy has been nominated for a Golden Globe rather than Chau, who deserves awards not just for this but also her performance in THE WHALE. What a year she had in 2022.

However, while I do think the film is worth watching, well-made, and funny, I couldn't shake the feeling that it was a really good 60-minute episode of Black Mirror rather than a feature film: a high concept comedy that couldn't sustain its runtime.

THE MENU has a running time of 107 minutes, is rated R, played Toronto 2022, and is available to stream.