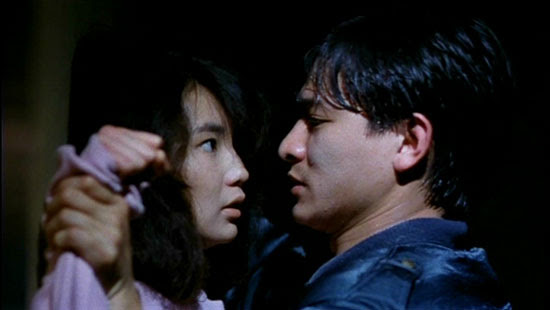 AS TEARS GO BY sees Wong Kar Wai's essentially romantic, fanciful nature shoe-horned into a conventional Hong Kong traid movie, reminiscent of MEAN STREETS. The result is a movie that is occasionally surprising but which has dated badly. Indeed, to modern eyes, it can sometimes feel like a pastiche. Having said all that, the movie opens in classic WKW territory. We're in a cramped flat in Kowloon and a young man (Andy Lau of INFERNAL AFFAIRS fame) is about to fall in love with a woman he has barely met. Instead of the femmes fatales of later flms, AS TEARS GO BY features a young Maggie Cheung as a milk-sop provincial who simpers in a hugely under-powered role. Naturally, this new relationship will force Brother Wah to reconsider his future as a gangster. It doesn't take much: he was already getting tired of bailing out his volatile, useless side-kick, Fly (classic Joe Pesci territory).

The movie oozes eighties stylings. There's a deeply annoying synthesizer sound-track; everyone looks like they trying to be extras in TOP GUN; the plot is pretty conventional and the denouement utterly unsurprising. Jacky Cheung over-acts horribly as Fly and Andy Lay isn't given a chance to display the talent he shows in INFERNAL AFFAIRS. So, pretty much the only reason to watch this film is to trace out the developing style of Wong Kar Wai. We can see it in superficial things like the use of cheesy songs and stroboscopic photography from DP Wai-Keung Lau. But we can see it in the substance of the film and the scenes that sit around the obligatory set-piece action sequences: lovers are thwarted and romantic life is squeezed between the petty obligations of real life.

AS TEARS GO BY was originally released in 1988 and played Toronto 1989. It is available on DVD.

*Thanks to the old lag, Berko, for clueing me in to the correct terminology for this maddening effect that so marred my enjoyment of MY BLUEBERRY NIGHTS.
Posted by Bina007 at 19:50