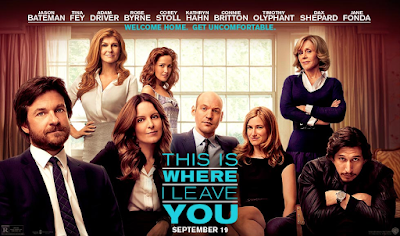 THIS IS WHERE I LEAVE YOU has a running time of 103 minutes and is rated R. The movie played Toronto 2014 and was released earlier this year in the USA, UAE, Slovenia, Chile, Singapore, Bahamas, Canada, Mexico, Taiwan, Trinidad and Tobago, Aruba, Switzerland, Colombia, Germany, Guatemala, Honduras, Austria, Panama, Paraguay, Spain, Finland and South Africa. It opened this weekend in the UK, Ireland, Latvia, Turkey, Australia, Croatia, Israel and New Zealand. It opens in November in India, Czech Republic, Portugal, Brazil and Italy; in December in Azerbaijan, Kazakhstan, Russia, Slovakia, Ukraine, Cyprus, Poland, Romania, Argentina, Uruguay, Bulgaria, Philippines, Peru and Serbia; in January 2015 in Denmark, Norway and Belgium.
Posted by Bina007 at 13:22 No comments: 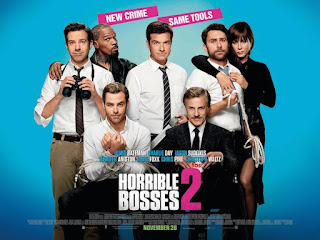 HORRIBLE BOSSES 2 has a running time of 108 minutes and is rated R.  The movie is on global release.
Posted by Bina007 at 12:44 No comments:


MOCKINGJAY is a dirge of a film. Two hours of hackneyed dialogue, J-Law stumbling around debris with PTSD interspersed with the occasional attempt at a rousing speech for rebellion.  The movie has no pace, no flow, no excitement, largely because it's basically pre-amble to the final showdown between the oppressed masses and the ruthless President of this dystopian future dictatorship.  I'm not sure how the young fans of Suzanne Collins' wildly successful books will react to the style and content of this film but I found the shift in tone from the gladiatorial action of the first two films to the attempt at earnest commentary on war jarring.  Which isn't to say it isn't an honourable attempt at engaging with contemporary politics, but my god it isn't entertaining either.

As the movie opens, Katniss Everdeen (Jennifer Lawrence) has been rescued from the Hunger Games and wakes up traumatised in District 13 - an austere military bunker run by the sinister President Coin  (a typically steely Julianne Moore).  Coin decides to pimp Katniss out in much the same way as her nemesis President Snow (a 2-D villain played with mustache-twirling glee by Donald Sutherland) did.  Instead of schmaltzy TV interviews for the state, Katniss now does supposedly impromptu Churchillian speeches urging the rebels to rise up - all of which have been expertly stage managed by Coin and her on-the-ground director Cressida (Natalie Dormer).  The movie cruises toward the inevitable showdown contrasting the "propos" with the terrorist/freedom fighter acts in various districts. And all the time, in the background, there's Katniss' demand that Peeta be rescued, culminating in an extraction that is clearly inspired by the Navy SEALS raid on Abbotabad.  All of this is fine, except that it gets undercut by the hokey dialogue and plot turns.  Of COURSE, when Katniss rescues her sister's cat we just now there's going to be some perilous plot moment when rescuing the cat places Katniss in jeopardy.  And the scenes near the end when President Coin commands her troops against a state bombing campaign reeks on the final scenes in STAR WARS: A NEW HOPE.

Overall, I'm not sure whether they really needed to cut the final book into two films. This first part could easily have been much shorter - just one propo - just one montage of the people rising up - because what we want to get to is the final fifteen minutes of Part 1 and then all of Part 2.  I applaud the good intentions to get gritty and real but once again, I'm just not sure how this constitutes any kind of credible storytelling in a world of such outlandish fantasy costumes and hokey dialogue and cartoon villains.

MOCKINGJAY has a running time of 123 minutes, is rated PG and is on global release.
Posted by Bina007 at 21:27 No comments:

LIFE PARTNERS is a stealth movie. It starts off so quiet and banal and forgettable and then suddenly you realise you are engrossed in the characters' lives and when they get into arguments they feel lifted from your reality. This is the kind of observational dramedy that is harder to pull off - to truly make authentic - than it seems.  Accordingly, it probably should've gotten more attention than it did.

Leighton Meester (Gossip Girl) starts as a twenty-nine year old girl struggle to reconcile herself to the fact that she hates her life. A dull secretarial job was meant to compensate for writing music, but she never really did that, and now she's just stick with no money, no idea of what to do with her life, and to cap it all, a best friend who is no longer available to her.  Why? Because that best friend Paige (Gillian Jacobs) has started her first serious relationship.  Paige wants good things for Sasha but mistakes her relationship misfires for a genuine career crisis - something which her new boyfriend actually gets.

It feels so slight to say that this is a movie about two best friends growing up and growing apart before realising that their different life choices are okay.  But this is some of the most real stuff I've seen depicting twenty-something female friendship. It's also refreshing to see a lesbian character as the lead, and that her sexuality isn't the focus of the film. Yes, she's flaky at relationships but it accepts Sasha for who she is.  More films should do that. So kudos to director and writer Susanna Fogel & Joni Lefkowitz.  Can't wait to see what they do next.

LIFE PARTNERS has a running time of 93 minutes and is rated R. The movie played Tribeca 2014 and is now available on streaming services.

CHARLIE COUNTRYMAN is a strange and fascinating film that feels like it has too many good ideas clashing with each other and shouldn't work and yet somehow does.  It stars Shia Labeouf, but don't let that put you off. His big-eyed naivety plays well here, as the directionless romantic sent to Romania by his dying mother (Melissa Leo).  While there he gets into all sorts of random scrapes, some of which involve taking large quantities of drugs in a youth hostel with Ron Weasley and Jay from THE INBETWEENERS. But the meat of the story is Charlie falling in love with the grieving daughter of the man Charlie sat next to on the  plane. Played with a perfect accent by Evan Rachel Wood, the character of Gabi is perfectly aware that she is a movie trope - immediately asking Charlie if he wants to fall in love with her because she is vulnerable and exotic. She also has that most cliched of movie tropes - a nasty violent ex-husband, played with mordant wit  by Mads Mikkelsen (HANNIBAL).

It's a movie that can be schmaltzy but is aware of that, and so is undercut by incredibly dark humour. The scenes in the youth hostel are genuinely laugh  out loud funny - I mean, I've never spent time thinking of porn names for Rupert Grint, but Boris Pecker is a work of genius. And some of the exchanges between a completely deadpan Mads Mikkelsen and Shia Labeouf were fantastically funny - just wait for the scene citing Dizzy Gillespie. So kudos to screen-writer Matt Drake for penning such a self-aware, daringly random, and funny script. As for the direction from first time feature helmer Fredrik Bond, it's elegant and particularly good in its use of music. The soundtrack featuring Deadmono is superb.

Like I said, this is an odd film that defies genre descriptions but if you go with it there's more than enough pay off.  Shia is at his most likeable (low baseline I admit), the music is great, Mads Mikkelsen is truly superb and Evan Rachel Wood is heart-breaking.

CHARLIE COUNTRYMAN aka THE NECESSARY DEATH OF CHARLIE COUNTRYMAN has a running time of 103 minutes and is rated R.  The film played Sundance and Berlin 2013 and was released last year in Norway, the USA, Denmark and Israel. It was released earlier this year in Singapore, Belgium, France, Portugal and Hong Kong. It is currently on release in the UK and Ireland.
Posted by Bina007 at 16:03 No comments: