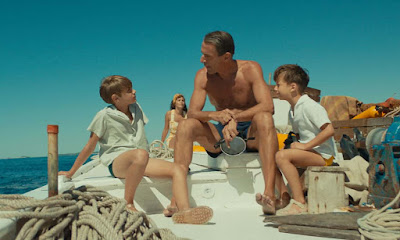 Playwright Bryan Fogel is also a keen amateur cyclist, and as many of us, was scandalised not just by the Lance Armstrong admissions, but that Armstrong wasn't brought down by any of the official Olympic or state machinery designed to entrap dopers, but by the fact that his team-mates turned on him.  So Fogel decided that he was going to show exactly how easy it was to evade drug tests bu doping himself, and capturing the entire thing in a documentary.  Originally he tries to get the guy who runs the US anti-doping lab to help design his drug programme, but he backs out.  His Russian equivalent, Grigory Rodchenkov, appears to have no such qualms.  And so Fogel starts taking IPO, and monitoring his progress, and sees predictable and incredible improvements in quality. Although, as I have often pointed out, that doesn't mean he magically becomes good enough to win a Tour de France.

About 45 mins into this 2 hour film, the real world catches up with Rodchenkov. The extent of state sponsored Russian doping at the Sochi Olympics is exposed, Russia receives a ban on competing, and Rodchenkov is under threat from the state.  The tone then shifts from doping expose to thriller, as Fogel helps Rodchenkov flee the country.  By this point, Fogel is evidently very close to the charismatic Russian doper, and admires his willingness to give detailed testimony against his former employers.  But the very closeness that gets Fogel the story, is also, ironically, the fatal flaw of this documentary.  Fogel wants us to see Rodchenkov as a victim, and maybe he is a little, but he's also equivocal and has done many illegal things that Fogel seems to inclined to forgive him for. The other fault of the documentary is about 20 minutes of running time that could easily be taken out of this rather rambling tale.

ICARUS has a running time of 121 minutes. It played Sundance 2017 and was released by Netflix this month.
Posted by Bina007 at 14:13 No comments: