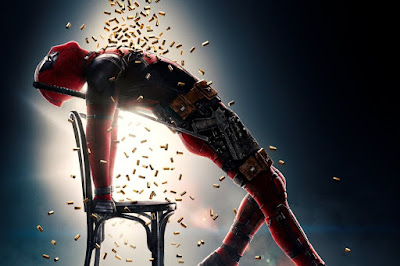 DEADPOOL has a running time of 119 minutes and is rated R. It is global release.
Posted by Bina007 at 10:59 No comments: 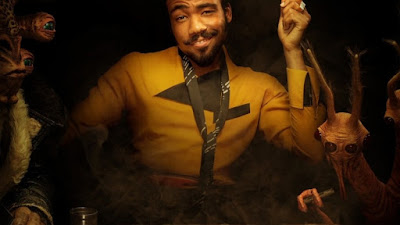 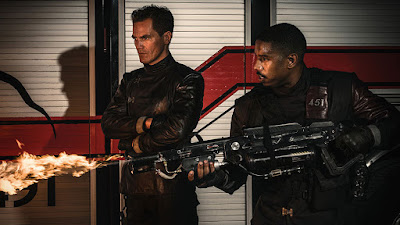 HBO's new adaptation of Ray Bradbury's iconic sci-fi dystopian novel is a strange and bloodless beast, differing wildly from the source material, handsomely designed, yet lacking in real punch. The film stars the wildly talented Michael B Jordan (BLACK PANTHER's antagonist) as Montag, a Fireman whose job is to burn books. Not just seditious books. All books. Because in this dystopian future books are scene as sowing chaos and frustration - giving people too many ideas - ideas that confuse or offend.  As the film progresses two important character developments occur that felt unearned and unexplored to me.  The first is that Montag steals a book - in shock that a woman would love them so much she would commit suicide rather than survive them.  This leads him to speak to Clarisse (Sofia Boutella), an "eel" who subversively reads books, leading him to a spiritual awakening.  Boutella is wasted here in a thin role that's basically a plot advancer.  The second thing is that we learn that Montag's supposedly dogmatically rigid boss Beatty is actually a secret reader too. And yet Montag never looks intellectually enquiring and Michael Shannon gives his standard 2-D performance as snarling baddie.

The plot motors on and we get to a finale that is meant to be profoundly moving but left me unaffected, as did the entirety of this film. I am deeply disappointed by Ramin Bahrani (MAN PUSH CART)'s direction and actually his failure to get better performances out of Jordan and Shannon - two actors I love. I suspect that this has something to do with a rather thin screenplay by Amir Nedari, that strips Montag of his wife, his home life, and makes Clarisse a much thinner character.  The only thing that I found really interesting was the production design and the way in which book burning is now a kind of reality TV show. But how much more powerful it could've been to show flashbacks to the world that slipped into illiteracy - to show our world - in which long form reading has given way to headlines and click bait - and fake news.....