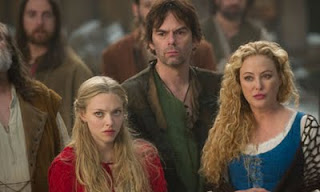 With her self-consciously naive re-telling of the Little Red Riding Hood fairytale, TWILIGHT director Catherine Hardwicke undoes all the good work of Angela Carter in bringing Charles Perrault's original story up to date with modern sexual mores. For, as she revealed in her brilliant short story, which was itself made into the film, THE COMPANY OF WOLVES, Red Riding Hood is really a story about a young virgin fearful of the bestial sexual appetites of men. In the original fairytale, the young girl is taught to stay well clear of men, lest she be raped and murdered. But in Angela Carter's retelling, the young girl takes control of her fate, fucks the wolf and lives happily ever after. Unfortunately, in this strange new world of teen cinema, where teenagers fall in love as if their lives depended on it, but no-one actually has sex, there is little room to explore the themes of The Little Red Riding Hood story. The resulting film is strangely neuter - strangely childish - a lot of fuss about nothing.

In this film Amanda Seyfield (MAMMA MIA!) plays Valerie aka LRRH as a drippy emo teenage girl, desperate to get it on with her dishy boyfriend Peter (Shiloh Fernandez - a poor man's Ed Westwick) but affianced to the similarly dishy Henry (Max Irons - a poor man's Robert Pattinson). She nearly fucks Peter, and flirts a little with Henry, but the potential for anyone with brown eyes to be the Big Bad Wolf obviously puts a dampener on things. Is it Peter? Is it Henry? Is it Julie Christie's gothic-loopy Grandmother? Who knows? Who cares? The movie grinds through its hokey whodunnit plot and the big reveal turns out to be dull and sexually uninteresting.

Amanda Seyfried is, I suppose, passable as the drippy teen, but both Max Irons and Shiloh Fernandez are wooden. Virginia Madsen as the mother and Gary Oldman as the sinister inquisitor are wasted and Julie Christie is in hammer-horror territory. The soundtrack, with music by Fever Ray, is suitably atmospheric, and Mandy Walker's photography is suitably moody, but she is let down by Thomas E Sanders' (Coppola's DRACULA) too shiny, too over-designed Alpine village set. I particularly hated screenwriter David Leslie Johnson's attempt to critique the use of torture in a war on terror (I kid you not!) and as I said before, his refusal to deal with the sexual subtext is just bizarre.

Overall, RED RIDING HOOD is just absolutely zero. A movie with no soul, no heart, no sex, no tension and no resolution worth its name. The only possible reason to watch it is for the comedy gold moment when you realise that the Reeve is Colonel Tigh! 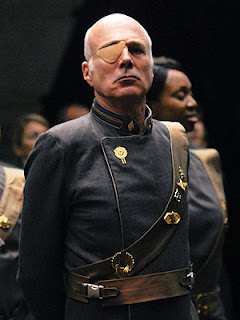 RED RIDING HOOD was released in March in the USA, Singapore, Canada, Iceland, the Philippines, the USA, Kazakhstan, Russia, Bulgaria and Denmark. It was released earlier in April in Turkey, Armenia, Australia, Kuwait, Finland, Norway, Belgium, Portugal, Slovenia, Colombia, Spain and the UK. It opens next week in France, Sweden, Argentina, Brazil, Germany, Malaysia, the Netherlands, Italy and Venezuela. It opens on April 28th in Greece, Hungary and Estonia. It opens on June 10th in Japan, and on June 24th in Poland.
Posted by Bina007 at 16:40